Why a special audit of Peter Hall's ICAC must include a review of his handling of the China donation inquiry , and the NSW LPAB 's dealings with Zhu Minshen

In his current inquiry into Chinese donations to the Labor Party ,ICAC Commissioner Peter
Hall QC(picture above) seems reluctant to go anywhere near the matter of Zhu Minshen and his Top Group,whose
donations to the NSW Liberal Party may have consequences for Hall's former colleagues at the NSW Bar and Bench who manage the Legal Profession Admission Board, the body that has provided Zhu the status of a law school vice chancellor.


The SMH has reported that NSW Premier Gladys Berejiklian has tasked the state's auditor with conducting an unprecedented review of the funding arrangements and management of four key independent agencies, including the Independent Commission Against Corruption and the NSW Electoral Commission.


As reported by the AFR Peter Hall's handling of the ICAC Inquiry into Chinese donations to the NSW Labor Party has been distinguished by what it refuses to see:

It has been shown here that the evidence with regards Zhu Minshen is in the public domain (see for example story below) but ICAC and Peter Hall seem determined to ignore it.It has been suggested that Hall appears to be conflicted:

ICAC's Peter Hall concerned with Chinese donations to the ALP,but not Liberals: Hall seems conflicted by the fact that an investigation into Minshen Zhu & Top Group's donations to NSW Liberals will involve the LPAB & AG Speakman

At this point one needs to determine if Peter Hall's conflicts of interest and incompetence are affecting ICAC's operational efficiency. Put in another way, simple, straightforward investigations are being drawn out by the Chief Commissioner's lack of expertise and conflicts of interest.

Hall seems to have taken to accusing the Government of depriving him of resources, and using that as a justification for not pursuing pursuing investigations, to the point where he has , as explained above, ignored information in the public domain and worse, attempted to prevent information from coming to his and ICAC's attention.

There is evidence that Hall stopped the flow of information from this writer to ICAC giving the usual three reasons, in order: lack of resources, too many emails, we have already given you an answer.

The first , lack of resources, seems to be a phrase appended to ICAC communications to help it make the case to government that it needs more money.
The second seems to be a way of justifying the first, .but also ensures that ICAC is not troubled by that which is wishes not to know.
The third, taken with the second, seems to be part of a disturbing trend especially among NSW Department of Justice employees to seek refuge from investigation by claiming harassment, threats and intimidation.

Unfortunately for Hall and ICAC, public domain information is growing in volume, and so are the tools available to those of us who have spent many years and hours harvesting that data. It is a sign of Hall's incompetence that he does not comprehend this and continues to act as if he were a lawyer in the 70s, or 80s, where on can be confident that everything that can affect a matter is contained in his brief, and not likely to be found elsewhere.
END 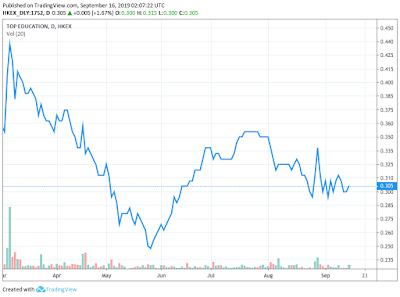 The graph above shows the movements in Zhu Minshen's Top Group's share price since its IPO and listing on the Hong Kong Stock Exchange.

It is easy to see that there was an initial spike after which share price and market capitalisation collapsed.

Anyone familiar with Asian markets will see that the Top Group listing and movement in share price follows the well trodden path of companies that list as soon as hard to get approvals are obtained and then sold via an IPO. In the case of Top Group the relevant approval was the "first and only" license to grant Australian law degrees granted a private company, granted by the NSW Legal Profession Admission Board,after consultation with the Law Council Australia.


It has already been shown on this blog that the granting of that license coincided with donations from Top and Zhu to the NSW Liberal Party. Consequently a inquiry into who the beneficiaries of the IPO were seems a logical step for an inquiry into political donations in NSW, but not it seems for Peter Hall QC and ICAC.


See
Peter Hall QC and ICAC have been provided information about Top Group by Dr Amen Lee, but ICAC will still not call Zhu Minshen