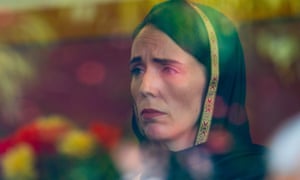 
The effective leader of the worldwide Muslin Brotherhood, the President of Turkey Recep Tayyip Erdogan  continues to issues statements designed to batter New Zealand's (and possibly in Australia's) leaders into granting concessions to his Muslim Brotherhood brethren who already have a presence in those countries, due to poor intelligence and immigration laws.

Ever the trader ,Erdogan has managed to make the  Christchurch massacre  of 49 Muslims an issue about Turkey, his leadership, and himself. He understands well that NZ and Australian leaders,susceptible to public opinion led by media happy to promote the "white supremacists threat" narrative,

Meanwhile, NZ PM Jacinta Ardern seems blinded to the danger, at one point in a televised interview soon after the massacre acknowledging Erdogan's right as a Muslim leader to speak against the murders. Encouraged by a worldwide media, she seems happy to continue playing her "I'm not Trump" role; she seems not to comprehend Erdogan's motives, unwilling to take him on, and instead continues to turn on her own  while regularly flying off to Christchurch to show  compassion,understanding etc etc etc.....

Meanwhile Erdogan (always the trader) continues to enjoy playing  with the Kiwis and the West like  he would a Turkish hooka.

Christchurch Muslim leader Mohammad Alayan wanted Muslim students in separate schools to protect them from the "cultural deficiency" of the NZ school system:Another example of Qaradawi's "castles of jihad",and "shield against surrounding evils".

Posted by Ganesh Sahathevan at 6:03 PM