ABC's Emma Alberici's has reported with approval: "This Chinese virus is dangerous" ,warned virologist Burioni as far back as early January 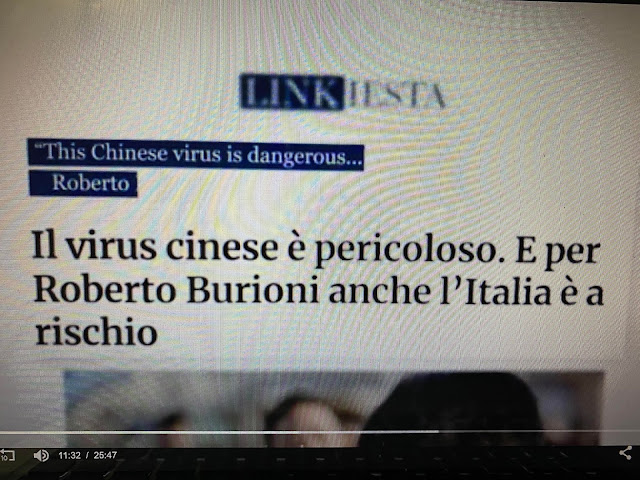 ABC's Emma Alberici reporting on ABC's Foreign Correspondent has reported an interview with Italian virologist Professor Roberto Burioni, and reported how Burioni warned the Italian Government of the danger of Wuhan Virus contagion from Chinese visitors. Alberici has reported that Milan regularly received three plane loads of visitors from Wuhan weekly.
The interview is available at the link below; listen from 10:00 onwards.
https://www.abc.net.au/foreign/life-in-the-time-of-corona/12086808
It is clear that Alberici approves of Burioni's advice.


Life in the Time of Corona


It's Europe's coronavirus epicentre with cases of infected rising by over a thousand daily. In the country's north, hospitals are full. Patients, young and old, are dying.
To control the outbreak, Italy is in lockdown but is it too little too late?
In the province of Lodi, half an hour from northern Italy's capital Milan, it's day 23 of the lockdown.
A young couple - Isabella and Roberto - are stuck at home with their 3-year-old daughter Eleonora. They're wondering when they will be able to resume normal life.
The northern Lombardy region has been dubbed the ground zero of Italy's corona crisis. So far, over two thousand people have died there and nearly thirty thousand have been infected.
After Lombardy, the virus spread through the north, then nationwide.
At first, doctors mistook it for the flu. Precious time was lost and now Italy, known for its warm embraces and kisses on both cheeks, has more cases than any country apart from China.
Hospitals have been swamped. All non-corona related patients' care has been sidelined. Doctors have been issued with protocols about which patients to prioritise and which not to - a form of disaster medicine.
Desperate to bring the virus under control, Italy has finally taken strong action, declaring a nationwide lockdown. Schools and universities have shut. Shops, cafes and restaurants have closed. Apart from buying groceries, people need official authorisation to move around or else face a fine.
Reporter Emma Alberici can't travel to Italy but she has relatives and friends in and around Milan.
For this special report, Emma taps into her network of family and friends as well as doctors and businesspeople, to tell an intimate story about how families, communities and the country are dealing with this unprecedented health emergency.
We use skype calls, phone diaries and photos to bring you a picture of Italy in lockdown.
In Milan, we meet the head surgeon at one of the city's major hospitals. He's isolated at home after contracting the coronavirus from one of his patients. He explains how he's being treated for the infection and his fears for his wife, who's working as an obstetrician.
There's 7-year-old Zoe, who's doing schoolwork from her home in Milan. She skypes her Australian friend Livia and they chat and giggle about the virus and hand washing.
We meet Emma's 90-year-old aunt recently hospitalised with influenza, and her cousin - also Emma Alberici - who's looking after her mother while holding down a job as CFO of a big pharmaceutical company in Milan - an industry which has special exemption from the lockdown.
We hear from Isabella and Roberto about the meals they're cooking and the bread they're baking.
And we interview virologist Prof Roberto Burioni who warns Australia that this virus is dangerous and must be taken with the utmost seriousness.
This is an intimate insight into an extraordinary moment in history.
Watch 'Life in the Time of Corona' on Tuesday 24 March at 8pm on ABC TV and iview.
Posted by Ganesh Sahathevan at 3:11 AM