Deloitte Australia and iFLYTEK signed MOU;iFlytek blacklisted by the US for human rights violations against Uighyurs;iFlytek is state owned and has office in Sydney,opening attended by Delloites


The Commerce Department has issued a list of 28 state security bureaus and tech companies in China that it says are being used to suppress the country's Uighur Muslims and other ethnic minorities – a move that blocks them from doing business with U.S. firms.

The revised Entity List that came out late Monday adds several security bureaus with jurisdiction in China's western Xinjiang region, where the Uighurs are concentrated, as well as firms such as Hikvision and Dahua Technology, which are leading providers of video surveillance equipment.

The filing says the entities "have been determined by the U.S. Government to be acting contrary to the foreign policy interests of the United States," and have been engaged in "China's campaign of repression, mass arbitrary detention, and high-technology surveillance against Uighurs, Kazakhs and other members of Muslim minority groups in the [Xinjiang Uighur Autonomous Region]."

In a statement, Commerce Secretary Wilbur Ross said the U.S. "will not tolerate the brutal suppression of ethnic minorities in China." 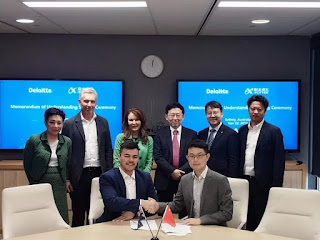 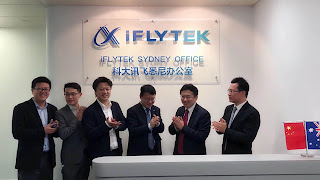 November 23, 2019, Deloitte Australia officially signed a Memorandum of Understanding (MoU) with iFLYTEK, a Chinese company well-known for Artificial Intelligence (AI), to commence a formal partnership to provide advanced AI solutions to the Australian Healthcare industry. Demonstrating the global reach of Deloitte, Deloitte Australia will be supporting iFLYTEK with its expansion outside of China in the future. It is reported that since iFLYTEK and Deloitte China reached strategic cooperation in 2018, the two sides have communicated actively, and the signing of MoU has enabled further opportunity for cooperation between the two entities.
A recognised global industry leader in AI technology, iFLYTEK will cooperate with Deloitte Australia in language transcription and translation after the signing, taking the lead in applying intelligent voice technology in Australian medical institutions, and providing professional transcription and translation services for Australian medical clinicians. Deloitte  iFLYTEK LCSP Kurt Tan believed iFLYTEK would benefit greatly working alongside the Chinese Services Group, led by Vera Ou-Young to co-deliver solutions.
Following a live demonstration, Vera and the CSG team were excited at the prospect of taking these AI solutions into the Australian market and connected with Stephanie Allen, Deloitte’s Global Healthcare Leader.
Stephanie presented several key contacts in the healthcare industry with the opportunity to experience iFLYTEK’s technology firsthand and the technical value of iFLYTEK received recognition of representatives at the event. Stephanie Allen said “iFLYTEK have also developed a very powerful decision support tool for clinicians aimed at supporting primary care doctors who need to have a good knowledge across a wide range of health conditions and also for multi disciplinary teams where knowledge from different specialists needs to be knitted together to deal with complex health conditions. This capability has the potential to transform access, quality and cost of care in China but also across the world.” In Australia, many government agencies have begun to adopt iFLYTEK's products, and some other organizations have expressed interest in it.
On the same day, CFO of iFLYTEK, Dawei Duan, alongside Deloitte LCSP, Kurt Tan jointly unveiled the office of iFLYTEK in Sydney.
As one of the world's largest professional service organizations, Deloitte has always been committed to supporting Chinese enterprises to accelerate their efforts to become world-class enterprises. With the help of a global network, technological innovation  information technology and other service capabilities and advantages, Deloitte continues to support Chinese enterprises actively responding to industrial transformations and reforms with top global talent, and helping first-class Chinese enterprises grow on the global stage.
END

Posted by Ganesh Sahathevan at 12:03 AM