Coronavirus :Singapore diversifies while Australia spends millions to ensure dependence on Chinese students- Monash, Melbourne, RMIT have since 2009 preferred less overseas students, but Richard Marles may have forced their dependence 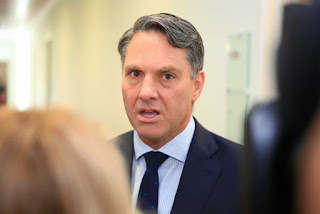 As reported earlier today on this blog:

Singapore's Trade Minister Chan taking advantage of the coronavirus crisis to wean his country's economy of China;Australia on the other hand has warned its citizens that doing so is racist, discriminatory, will destroy their country's multicultural fabric

And as if to prove the point, the SMH has just reported:

Qantas could dispatch a raft of special flights to help retrieve tens of thousands of stranded Chinese students as soon as the coronavirus travel ban is lifted under a drastic plan being considered by the university sector.
The federal government extended the China travel ban for another week on Thursday, further  narrowing the window for 100,000 students to begin their first semester studies in Australia.


The exercise will not be cheap, and makes little sense but for a determination to ensure that Australia remains dependent on Chinese students.


In 2009 Richard Marles told the US Consul General that education was a growth area, but US officials said that his comments were not consistent with what they had been told by contacts at Melbourne, Monash and RMIT; that the universities were concerned that the dependence on foreign students was eroding the quality of their degrees(see Wikileaks excerpt below)


Marles was at the time federal Member for Corio and the new Parliamentary Secretary for Innovation and Industry.It appears that his government encouraged a dependence that has been hard to break. Marles is now in opposition and ought to take advantage of the opportunity presented by the coronavirus outbreak to correct past mistakes.

https://wikileaks.org/plusd/cables/09MELBOURNE87_a.html
Excerpt
(Comment: Marles' comment is not in line with observations we have heard from Melbourne's big three universities - the University of Melbourne, the Royal Melbourne Institute of Technology (RMIT) and Monash University. These universities are concerned about the impact a growing foreign student population is having on the quality of their education system and plan to appeal to the federal government for additional funding rather than increasing revenue-earning foreign student numbers. Septel for additional details. End Comment.)

Posted by Ganesh Sahathevan at 3:45 AM