The photo below is from the Law Council Of Australia website. The photo goes with a story about LCA president Arthur Moses SC's speech in Kuala Lumpur , which the Australian High Commissioner to Malaysia Andrew Goledzinowski described as "oustanding". Moses speech praised the Bar Council, its immediate past president George Varghese,and attacked Mahathir.

The photo from the LCA website of that event is interesting for absent from it are Varghese, his  Chris deputy and current president Abdul Ghafoor, or any other Bar Council officer.

Instead ,we have Christopher Leong, who was president in 2015,.While Leong obtained his LLB from Nottingham University he was a student at Monash University , from approximately 1981 to 1983,from where he obtained a BA.

Given the above, the brave  statement by the Bar Council admonishing the Agong for doing the right thing in the current political impasse does look like yet another attempt by the Australian Government to ensure that Anwar Ibrahim becomes Prime Minister of Malaysia.

Bar Council President Fareed Gafoor has been very busy this year.First this:

Andrew Goledzinowski
@AusHCMalaysia
As we approach the beginning of the new Legal Year in M’sia, I took the opportunity to catch up with

@malaysianbar
President Dato’ Abdul Fareed. • Cooperation on legal reform and professional issues has long been a strength of the 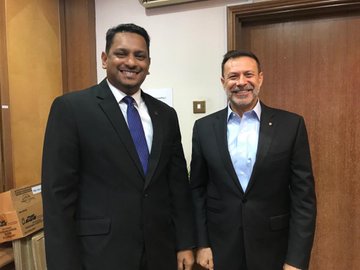 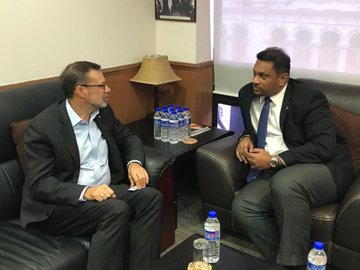 And now,  as reported by THE STAR, but note that the Agong is interviewing his MPs personally, not relying on Statutory Declarations. PETALING JAYA: Parliament should determine who commands the confidence of the majority and is to be appointed as Prime Minister, says the Malaysian Bar.

In echoing the advice of Attorney General Tan Sri Tommy Thomas who said that the way forward is to have this matter determined by the Dewan Rakyat when it reconvenes on March 10, the Malaysia Bar said a vote of confidence or otherwise could be taken and debated against the interim Prime Minister.


Bar president Abdul Fareed Abdul Gafoor cautioned against the reliance on Statutory Declarations (SDs) to determine the support of MPs, saying that the authenticity of such SDs can be disputed.

“Any attempt to form a new government through political horse-trading must be avoided especially if it negates the aspirations of the electorate, as this would lead to unnecessary controversy and raise questions of legitimacy.


“Political stability is essential in these challenging economic times and we call on all parties to behave in a calm and mature manner, having due regard to our Constitutional framework.

"The interest of the nation and its people should prevail over all other personal or partisan interests, ” he said in a statement on Tuesday (Feb 25).

However, the King has consented for Dr Mahathir to continue running the country as interim Prime Minister until a new premier has been appointed and a new Cabinet formed.

Dr Mahathir is the only one from the Pakatan Harapan administration who is left after the Yang di-Pertuan Agong cancelled the appointments of all Cabinet members.

Aside from ministers, the duties of other members, including the deputy prime minister, deputy ministers and political secretaries ceased, effective Feb 24.