ANZ deploys "hurt blockers" : Wonder how well these work to remedy the damage, loss and hurt caused the Malaysian taxpayer by ANZ in the matter of 1MDB


From AMBank and AMIslamic's  major shareholder and manager, ANZ Bank : 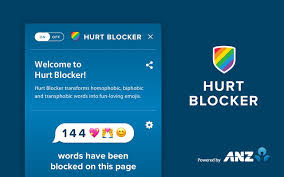 Almost 80% of Lesbian, Gay, Bisexual, Transgender, Intersex & Queer (LGBTIQ+) Australians say they are at times the victim of hurtful language. In fact, in the last 12 months LGBTIQ+ people were still called seriously hurtful and homophobic words.
During the 2020 Sydney Gay and Lesbian Mardi Gras Festival, ANZ is taking a stand against hurtful language and has launched #LoveSpeech – a national campaign to educate Australians on the impact that hurtful language has on the LGBTIQ+ community.
Spread #LoveSpeech. Posted by Ganesh Sahathevan at 3:39 PM