Airbus has admitted that payment to Caterham F1 was a bribe, not an offset-Irrelevant how Malaysia defines the payment 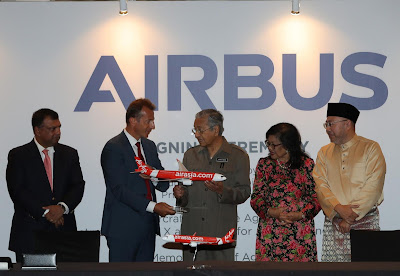 Dr Mahathir Mohamad said that asking for an offset in a business transaction is a normal practice, provided the money is not pocketed.
The prime minister said normally when the government procures equipment, they would ask for an offset.
“And whether you regard an offset as a bribery, that’s up to you,” he told reporters after an event here.
....Mahathir wondered why getting something in return when purchasing an item at a high price could not be accepted
“If the money goes into our pocket, that is corruption. But if the money is channelled to other things, it is an offset.
“That is my personal view.”
While Airbus has entered into a number of offset agreements with the Malaysian Government over the years (see photo and caption above and story below) it has been very clear that the payments Caterham F1 was a a bribe, and not part of any government offset agreement. As reported yesterday, how Malaysian authorities choose to characterise the payments is irrelevant:

Airbus cannot continue dealing with AirAsia and AirAsiaX, regardless of what MACC and other Malaysian authorities decide : $ 4 Billion fine means business cannot be conducted with current management and board; AA & AAX management board must be purged, given AA &AAX Airbus fleet

Airbus A400M concept(click to view full)
In the spring 2005 the Royal Malaysian Air Force had put its C-130 Hercules upgrade program on hold, and was considering the Airbus A400M following intense lobbying from France. LIMA 2005 saw the Malaysian government sign a MYR 2.8 billion (EUR 630 million/ $740 million) contract for 4 Airbus A400Ms airlifters, for delivery during 2013-2014. The A400M is due to have its maiden flight in 2007-2008.
Deputy Prime Minister Datuk Seri Najib Tun Razak said the new aircraft would supplement the aging fleet of 15 C-130 Hercules (according to Scramble, 13 x C-130H or stretched C-130H-30, 2 x C-130T tankers) aircraft currently in service. The C-130, he said, would continue its role until it is no longer economical to operate the aircraft. So how did EADS bring in this deal, and how does it fit into EADS’ larger strategy?

Airbus A400M
Industrial offsets were a major component of this deal. In November 1990, a firm called Composites Technology Research Malaysia Sdn Bhd (CTRM) was established, in line with the government’s aspiration to start manufacturing composite parts for the aerospace industry. Within the framework of this contract, Malaysian industry will receive high-technology work packages worth initially 1 billion Ringgits, (about EUR 225 million/ $265 million) for the design and manufacture of A400M airframe components to be delivered worldwide.
Deputy PM Najib noted that “the procurement must be seen as a package, not only to fulfill the armed forces’ needs but also as an effort to expand the nation’s aerospace industry.”
The Malaysian decision brings the number of firm orders for the A400M to 192 aircraft.
Through its divisions and joint ventures, EADS has already developed a suite of partnerships with the Malaysian aerospace industry. These relationships formed a base that enabled the delivery of the above-mentioned offset agreement, and also gave EADS additional negotiating leverage with the Malaysian government.
EADS Airbus has worked with CTRM in the field of composite materials, starting with the manufacturing of fixed trailing edge for the A300 passenger jet and followed by A320 leading and trailing edge lower panels. CTRM is also designing and building the new A380 fixed leading edge lower panels, and will now add A400M related work to that list
Malaysia operates the EADS Eurocopter EC355 Ecureuil, and that airframe also sees some commercial use around the offshore oil platforms found near Borneo. EADS opened its Eurocopter Malaysia regional industrial and maintenance center in 2004, establishing partnerships with more than 15 Malaysian companies and launching an ambitious training program with the Malaysian Institute of Aviation Technology aiming to train 100 students over the next four years.
EADS has also developed cooperation in the field of Satellite Ground Receiving Stations and in the field of Secure Network and defense products with Technology Park Malaysia (TPM).
Jean-Paul Gut, EADS COO for Marketing, Strategy and International added: “Our major achievements in Asia Pacific in the civil and military aviation business are direct results of our partnership and investment strategy in the region during the last 10 years.”
Christian Duhain, Head of the EADS International marketing organization, added: “Asia Pacific is one of the key growth regions for EADS. In the next five years we’ll see the Asia Pacific share of our turnover reaching 20% and by 2015 we expect 30% portion of our sales to come from Asia Pacific.” Corporate release.

Posted by Ganesh Sahathevan at 9:44 PM