A year has passed and still no explanation from NSW LPAB Chairman Tom Bathurst  about his attitudes to corporate governance:: Events marking commencement of the 2020 Law Term provide CJ the opportunity to respond publicly to article in The Australian published in Jan 2019, as well as his oversight of the  College Of Law and Top Education Group


NSW Chief Justice Tom Bathurst says he is "still enjoying the job". Wolter Peeters,AFRChief Justice Bathurst told the AFR's Michael Pelly was his "present intention" to serve until the end of February, 2022. However, he noted that he can continue to preside until March 17, 2023 (when he turns 75).

More than a year has passed since The Australian reported that the NSW Legal Profession Admission Board and its  Chairman Tom Bathurst (also CJ NSW) determined that a conspiracy theory found on the internet was credible and true (see story below).

While only mentioned in passing in story in The Australian, the NSW LPAB and its chairman who was this country's leading commercial silk before he became chief justice also determined that the facts of a decision of the Supreme Court NSW could be re-written (see below).

Also mentioned in passing without elaboration is the issue of the chief Justice's oversight of the College Of Law.His aggressive defence of the College has resulted in his actions being investigated in Malaysia:


All these matters require explanation but nothing has been heard from the NSW LPAB or the Chief Justice. The events  planned for the coming week to mark the beginning of the 2020 Law Term provide the Chief Justice ample opportunity to finally explain himself.

While at it he may also want to explain the matter of Zhu Minshen and Top Group.


In October 2001 the Supreme Court NSW handed down its decision in Carlovers Carwash Ltd v Sahathevan . The decision provided this writer and other journalists significant protection, and was later applied in Bond v Barry, where Paul Barry (better know now as host of MediaWatch)  relied on  the Carlover's decision to successfully defend himself against a charge of defamation by the late Alan Bond.

Quite apart from affirming the statutory safe harbor provisions protecting journalists found in for example the Fair Trading Act NSW, the cases were important for the defining the noun " journalist" in very broad terms.That broad definition is especially relevant today given the ability of researchers, investigators and writers to self-publish via their own blogs and social media such as Twitter and Facebook. Bond v Barry continues to be quoted to this day (and Sahathevan concedes he will never be as famous as Barry).

There has however been a recent decision of a quasi-legal body that seems to suggest that the protection provided by those cases and the decisions that follow them is being restricted, if not discarded by the legal establishment, especially in NSW.

In a recent decision finding this writer not fit and proper for admission to practice law in NSW the Legal Profession Admission Board (LPAB), which is overseen by the Chief Justice of NSW Thomas Bathurst,  the LPAB (which includes three sitting judges,) determined that the Carlovers decision  did not concern the work of a journalist but rather a Carlovers  employee who after being sacked by Carlovers, harassed, threatened and intimidated the company and its directors.

In doing so the LPAB is suggesting that the  Carlovers decision was incorrectly decided, or that the NSW Supreme Court's views on the rights of journalists to report, and of press freedom generally, have become more restrictive.

The Carlovers decision attracted much media attention locally and in this region and it has relevance especially today given the recent raids by the Australian Federal Police In his story on that matter published in the SMH on 14 October 2000 the last Ben Hills reported:


Mr Sahathevan's counsel, Ms Judith Gibson (now Judge Judith Gibsion) , argued that it was an important press freedom case, because if injunctions could be used in this way it would ``place every whistle-blower and every source at risk''. She said her client had claimed that Carlovers had made false and misleading statements to the Stock Exchange.

The LPAB put its findings with regards Carlovers in the context of what it claimed was evidence of this writer's history of publishing material that was false or otherwise lacking any evidence and were in fact part of this writer's criminal enterprise (see story below published in The Australian on 17 January 2019).


So certain is the LPAB of its findings that it has included in its findings a determination that this writer has shown no  remorse for his work as a journalist; it has made specific reference to the story this writer investigated and wrote for publication in  The Sun newspaper in Malaysia in 1996, which earned him the  sacking from that paper  which in turn led to a number of related defamation matters in Malaysia and Australia, including the Carlovers matter.


In Carlovers submissions were made by Carlovers and its directors about this writer's sacking from The Sun,and the Malaysian matters which included an AUD 7 Million claim for damages.The directors included the Malaysian  businessman Vincent Tan Chee Yioun, who owned The Sun,and still controls it via his Berjaya Group of companies. The LPAB has found that these submissions were "irrelevant".

Tan's role in a number of questionable high profile defamation and corporate matters in Malaysia were well known, and the subject of adverse media reports worldwide, even in 2000. In 2006 a Malaysian Royal Commission which investigated corruption of the judiciary found that there was prima facie evidence that Tan and two former chief justices of Malaysia had committed offences under Malaysia's Sedition Act, Official Secrets Act, Penal Code and the Legal Profession Act. Early this year the Malaysian Government announced that there will be a second RCI into judicial corruption; the events of the past continue to have an impact even today.

The LPAB's findings given the issues concerning Vincent Tan described above suggests  that the  current NSW Supreme Court will not tolerate investigation by journalists regardless of how serious the matter.It does suggest a degree of antagonism towards journalists that is so great that the Court would be happy to re-write its past decisions,no matter how well established  those decisions might be. In doing so the Court 's seem prepared to re-interpret the not merely the opinion but even the facts of past decisions.

Meanwhile, this writer continues to investigate and write about the issues and facts he discovered in 1996 which got him sacked, as well as other more recent events such as the 1MDB affair, Australia's submarines, and the NSW legal establishment's College Of Law.


The body overseen by Chief Justice Tom Bathurst responsible for deciding who can practise law in NSW relied on a wildly defamatory Malaysian blog depicting ABC journalists, former British prime minister Tony Blair, financier George Soros and others as part of a global conspiracy when deciding to deny a would-be solicitor a certificate to practise.

Chief Justice Bathurst and Legal Practitioner Admission Board executive officer Louise Pritchard declined to answer The Australian’s questions about how the article came into the board’s hands and why its members felt the conspiracy-laden material could be relied upon as part of a decision to deny Sydney man Ganesh Sahathevan admission as a lawyer. Nor would either say which of the 10 members of the LPAB, three of whom are serving NSW Supreme Court judges, was on the deciding panel.

Ms Pritchard has left her role at the LPAB since The Australian began making inquiries in September. The article, published in December 2017 on website The Third Force, accuses Mr Sahathevan of engaging in a conspiracy to attack then Malaysian prime minister Najib Razak.

Mahathir Mohamad, who returned as prime minister after toppling Mr Najib in elections held last May, is also smeared as a participant in the globe-spanning conspiracy.

Mr Najib was under pressure at the time over the country’s sovereign wealth fund, 1MDB, which the US Department of Justice says has been looted of billions of dollars that was spent on property, art, jewels and the Leonardo DiCaprio film, The Wolf of Wall Street.

Malaysian authorities have charged Mr Najib with dozens of corruption offences that could attract decades in jail over his role in the 1MDB scandal, which allegedly included the flow of about $US1 billion through his personal bank account.

The article’s author, Malaysian political operative and Najib loyalist Raggie Jessy, also accused Rewcastle-Brown, Stein and Besser of receiving money, totalling millions of dollars, to participate in a Four Corners program exposing the 1MDB scandal that aired on the ABC in March 2016.

There is no suggestion any of Mr Jessy’s bizarre allegations are true. However, the LPAB cited the piece when denying Mr Sahathevan admission as a lawyer in an undated and unsigned set of reasons sent to him on August 3 last year.

It used the article as evidence in a passage dealing with legal conflicts between Mr Sahathevan, who has largely worked in the past as a journalist, his former employer, Malaysia’s Sun Media Group, and the company’s owner, tycoon Vincent Tan.

In that context, the board said the Third Force article reported “that Mr Sahathevan was investigated for blackmail, extortion, bribery and defamation”. While the article claims that blackmail, extortion, bribery and defamation “are but some of the transgressions many from around the world attribute” to Mr Sahathevan, The Australian was unable to find any reference in it to an investigation into him on these grounds.

It is unclear why the board felt the need to rely on the article, as it also made adverse findings about Mr Sahathevan’s character based on a series of other allegations including that he used “threatening and intimidating” language in emails to the College of Law and the NSW Attorney General and did not disclose his sacking from a previous job to the board.

Mr Sahathevan has denied the allegations in correspondence with the board.

The board also cited evidence that one of Mr Sahathevan’s blogs on Malaysian politics was banned by the Najib regime as indicating his poor character.

In an email to Chief Justice Bathurst, sent on August 30, Rewcastle-Brown said her site, Sarawak Report, which exposed much of the 1MDB scandal, was banned by the Malaysian government.

“I along with other critics of the 1MDB scandal (which includes Mr Sahathevan) became the target of immense state-backed vilification, intimidation and online defamation campaigns on behalf of the Malaysian government,” she said.

She said the board’s use of the Third Force article against Mr Sahathevan displayed “a troubling level of misjudgment and poor quality research, giving a strong impression that someone seeking to find reasons to disqualify this candidate simply went through the internet looking for ‘dirt’ against him”.

“The Third Force has consistently been by far the most outlandish, libellous, vicious and frankly ludicrous of all the publications that were commissioned as part of former prime minister Najib Razak’s self-proclaimed ‘cyber army’ which he paid (and continues to pay) to defame his perceived enemies and critics,” she said.

Besser, who now works in the ABC’s London bureau, told The Australian: “It’s clearly nonsense and comes from the darkest corners of some pretty wild Malaysian conspiracy theorists.”

Mr Sahathevan’s application is to be reconsidered at an LPAB meeting next month (Admission has since been denied, for the same reasons, but without explicit reference to the Thirdforce story). 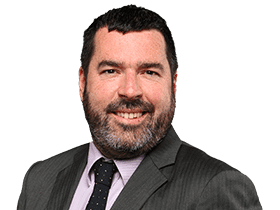 BUSINESS REPORTER
Business reporter Ben Butler has covered everything from tractors to fashion to corporate collapses. He has previously worked for the Herald Sun and as a senior business reporter with The Age and Sydney Morning... Read more
Posted by Ganesh Sahathevan at 9:57 PM

Posted by Ganesh Sahathevan at 5:38 PM