Najib admits in court that he knew where KWAP-SRC money had been sent to, but prosecutors seem uninterested : Najib's admission contradicts all earlier statements


In court on Tuesday 21 January 2020, when under cross-examination by ad hoc DPP Sithambaram Najib Razak said:

Sithambaram: Do you agree that the only achievement by SRC is to park RM3.6 billion in Switzerland?

Sithambaram: Did you not enquire (about this)?

Najib: It was supposed to be in transit for investment.

“I didn’t consent to any of these things. I am not party to all this. 1MDB paid the money as per the joint-venture agreements with the foreign countries... but once the money was paid, I have no control over what they did with the money.


This claim that once  1MDB paid the money to the relevant JV companies Najib and 1MDB had no control over what happened to the money has been a consistent part of the 1MDB story pre 9 May 2018 when the change of government occurred. In the words of Arul Kanda:
Arul Kanda: Swiss probe shows 1MDB could be victim of fraud

Najib ought to have been further questioned about his knowledge of the funds held "in transit for investment", but he was not.
END

This unfolded when Najib was cross-examined by DPP V Sithambaram, primarily about his role in the second government guarantee for Retirement Fund Incorporated's (KWAP) loan to SRC.

Sithambaram: Do you agree that at the time the (second) government guarantee was given, you were personally aware that SRC would not succeed because it had done nothing with the first loan.

Najib: I was hoping it would do better.

Advertisement
Sithambaram: It had done nothing. How could it do better?

Najib: I was hoping it would do better.

Following this, Najib agreed with the prosecutor that the government had to provide SRC with a short-term loan and grants when the company failed to service KWAP's loan.

V Sithambaram
Sithambaram: Do you agree that the only achievement by SRC is to park RM3.6 billion in Switzerland?

Sithambaram: Did you not enquire (about this)?

Najib: It was supposed to be in transit for investment.

Sithambaram: It cannot be in transit for seven years.

The company was originally a 1MDB subsidiary before it was taken over by Finance Minister Incorporated on Feb 12, 2012. Najib was the finance minister at the time.

In explaining why SRC received a government guarantee even before applying for the second loan from KWAP, Najib said SRC knew they would not get the loan without one.

When Sithambaran pointed out that it was "extraordinary" for cabinet to issue a government guarantee without SRC putting in an application, Najib said there was a memo from Treasury's then secretary-general Wan Abdul Aziz Wan Abdullah recommending the guarantee. 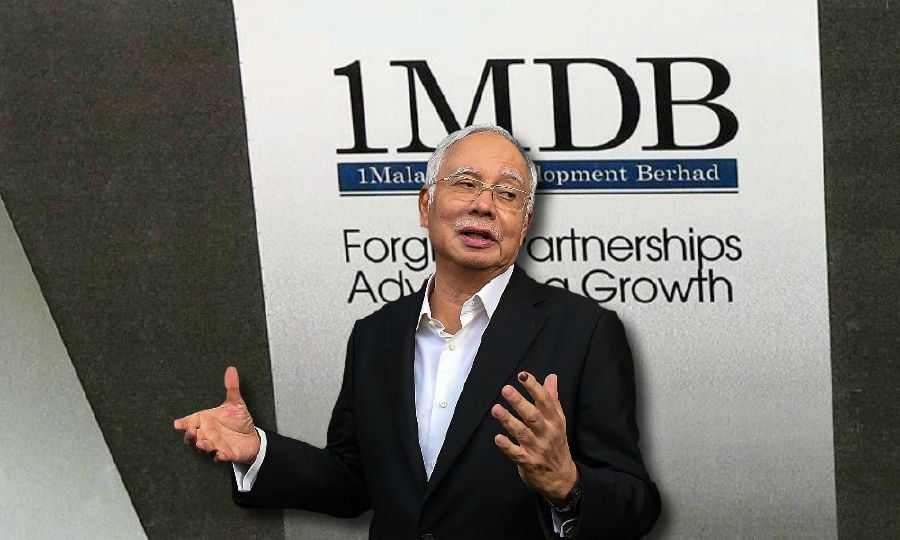 Datuk Seri Najib Razak says 1Malaysia Development Bhd paid the money as per the joint-venture agreements with the foreign countries.


By NST Online - June 28, 2018 @ 9:38pm
KUALA LUMPUR: Former prime minister Datuk Seri Najib Razak has once again denied playing any role in the alleged embezzlement of 1Malaysia Development Bhd (1MDB) funds.
In an exclusive interview with Malaysiakini, he said it would be absurd of him to authorise the use of public funds to acquire luxury items such as diamonds, properties, artwork, yacht and even fund a Hollywood movie, as alleged by the United States' Department of Justice.
“I didn’t consent to any of these things. I am not party to all this. 1MDB paid the money as per the joint-venture agreements with the foreign countries... but once the money was paid, I have no control over what they did with the money.
“In fact, I have never seen the yacht except in pictures subsequently (in the media). I have never seen the paintings. I don’t know what kind of paintings, and certainly, if you were to use 1MDB funds for that, I certainly would have never approved,” he was quoted by the news portal as saying.
Najib, who chaired the 1MDB advisory board, pointed out that he had held similar positions in other organisations but did not faced such problems.
“I have been in public service for so long and I have a sterling record. And it goes to show, if I was the final authority on all this, I would never have approved this.
“It doesn’t make sense. Why would I as prime minister approve public funds to buy yachts and paintings? It is just crazy.
“It is something which in my wildest dreams, I would never, ever approve or condone,” said Najib, who is also Pekan MP.
In the Malaysiakini interview, Najib said that if the public funds were indeed used to acquire the alleged items, then appropriate action must be taken against those individuals responsible.
“But if that is the case, then I hope a proper investigation will be done and whatever appropriate actions be taken against those responsible if public funds were really used,” he said.
Najib said after 1MDB had run into problems, the company’s main focus had always been on the rationalisation exercise and the negotiations with the foreign countries in question to ensure that Malaysia would not incur any losses.

Posted by Ganesh Sahathevan at 6:58 PM