Carbon dioxide 8% BELOW Australian climate expert Ross Garnaut's saftey threshold so what's causing the Australian bushfires? If Garnaut's proposals had been implimented trillions would have been lost for nothing

Australia's SBS and others have been reporting the following for the past month and a half:

Twelve years ago, economist Ross Garnaut led an independent study of the impacts of climate change on the Australian economy.

"This effect increases over time, but should be directly observable by 2020."

Garnaut's recommendations, as summarized by The Guardian:

The Garnaut report says developed nations including Britain, the United States and Australia would have to slash carbon dioxide emissions by 5% each year over the next decade to hit the 450ppm target. Britain's climate change bill, the most ambitious of its kind in the world, calls for reductions of about 3% each year to 2050.

Garnaut, a professorial fellow in economics at Melbourne University, said: "Achieving the objective of 450ppm would require tighter constraints on emissions than now seem likely in the period to 2020 ... The only alternative would be to impose even tighter constraints on developing countries from 2013, and that does not appear to be realistic at this time."

The report adds: "The awful arithmetic means that exclusively focusing on a 450ppm outcome, at this moment, could end up providing another reason for not reaching an international agreement to reduce emissions. In the meantime, the cost of excessive focus on an unlikely goal could consign to history any opportunity to lock in an agreement for stabilizing at 550ppm, a more modest, but still difficult, international outcome. An effective agreement around 550ppm would be vastly superior to continuation of business as usual."

Meanwhile. CO2 levels ppm are about 7%-8% BELOW Garnaut's safety threshold. 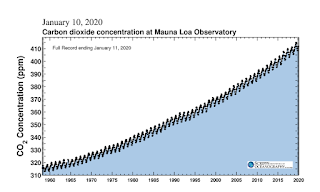 The question then must be; what is causing the Australian bush fires? It is necessary to start from the basis that Garnaut's work is flawed for had his recommendations been implemented, billions perhaps trillions in economic costs would have been incurred, and for nothing.
END

Posted by Ganesh Sahathevan at 4:23 PM