Singapore's oil and gas sector is worth USD 80 Billion, but it's actively pursuing "climate change" strategies-Is anyone in its ruthlessly pragmatic administration thinking of the costs, to the industry and other related parts of the Singapore economy?

The oil industry makes up 5 per cent of Singapore's GDP, with Singapore being one of the top three export refining centres in the world. In 2007 it exported 68.1 million tonnes of oil. The oil industry has led to the promotion of the chemical industry as well as oil and gas equipment manufacturing.[80] Singapore has 70 per cent of the world market for both jack-up rigs and for the conversion of Floating Production Storage Offloading units. It has 20 per cent of the world market for ship repair, and in 2008 the marine and offshore industry employed almost 70,000 workers.[81]

The sector provides cash for the financial services industry, so the impact of doing its "full part" would be in excess of what has been described above.

Clearly, the loss of luxury homes in Sentosa Cove at some point in the future is not the only cost that Singaporeans need to be concerned about: 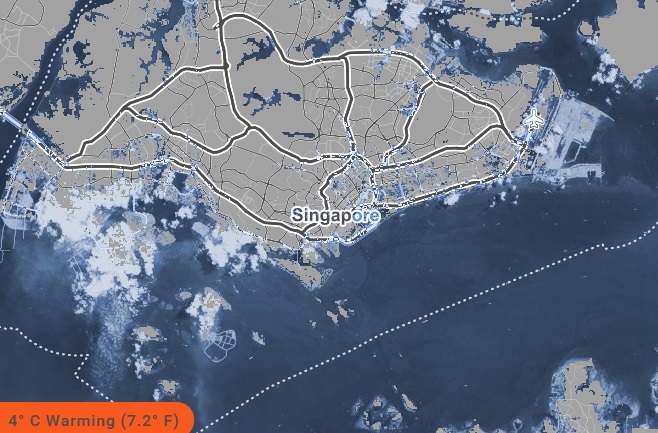 Source: Climate Central
The immediate costs of jumping on the climate change bandwagon are likely to cause greater damage.

This is a best prospect industry sector for this country. Includes a market overview and trade data.
Last Published: 6/13/2019

Posted by Ganesh Sahathevan at 5:36 PM