Australian billionaires propose to do a Bakun where Olivia Lum failed: Twiggy & Canon-Brookes looking decidedly old school, taking after Ting Pek Khiing,and is PwC going to be answerable to investors in this remake of the mid-90s Bakun Undersea Cable disaster

First the Sydney Morning Herald  headline, which seems not to have  made any impact in Singapore:

Australian billionaires Mike Cannon-Brookes and Andrew "Twiggy" Forrest have joined a capital raising of "tens of millions of dollars" to build a huge solar farm in Australia to supply electricity to Singapore.

David Griffin, chief executive of Sun Cable, did not disclose the total investment other than to say it was less than $50 million. Mr Cannon-Brookes and his wife, Annie, were "lead investors" with their family firm Grok Ventures, while Mr Forrest tipped in funds from his Squadron Energy company.


The over-subscribed raising marks the start of what could become a $22 billion plan to build the world's largest solar farm with a 10-gigawatt capacity covering 15,000 hectares near Tennant Creek in the NT, and a 22GW-hour storage plant.

The project would aim to supply competitively priced electricity to the Darwin region and to Singapore via a 4500-kilometre high-voltage cable.

All this brings to mind a slightly less ambitious plan from the mid 90s, which was even easier to fund, and finally died ten years ago despite valiant attempts by less than clean politicians to keep it alive: 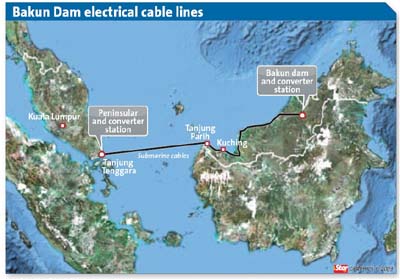 AND, Singapore's energy market is a tough one, even for local heroes like Olivia Lum, who has got  badly burnt by an attempt to diversify into energy generation:

In 2017, Hyflux embarked on a divestment exercise of Tuaspring Integrated Water and Power Project - the company's largest asset - "in line with its asset light strategy", but was unable to finalise any binding bids.
It said that "despite strong initial interest in this project", losses from electricity generation, lack of understanding of Singapore power market by potential buyers and delayed regulatory approval led to "a protracted sale process"
PwC  have led the fund raising for the Australian project, and one does wonder about their liability for promoting the project:

The Australia Singapore Power Link (ASPL) aims to supply renewable electricity from a 10GW solar farm to both Darwin and Singapore via a high voltage direct current transmission line – a plan first outlined by Beyond Zero Emissions in August, and which quickly attracted the attention of the likes of Cannon-Brookes.
According to a release from pWc, who guided the fund-raising process, the project will also include a massive 22GWh of battery storage located near Tennant Creek in the Northern Territory,  with electricity supply transported by a high voltage direct current transmission network, extending 4,500 km from the project site.
END

Posted by Ganesh Sahathevan at 7:10 PM