Singapore will plant more trees to battle climate change; but Singapore has yet to model tree falls that have caused fatalities ,despite having the data to do so. 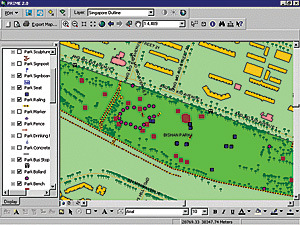 For each tree pictured on the PRIME interface, NParks stores additional
information about its size, species, health, and trimming history

Singapore's plans to tackle climate change will include nature-based solutions such as restoring its mangrove areas and planting thousands of trees, Minister for the Environment and Water Resources Masagos Zulkifli said yesterday.
While it has mentioned engineering options before, this is the first time the Government has officially said that nature-based solutions to deal with climate change are on the cards.
Mr Masagos underscored the seriousness of the threat posed by climate change, calling it an existential challenge that nations could not afford to ignore. "Otherwise, citizens will take their cause to the streets and reason will fail to rule," he said, in his strongest comments on the subject to date.

However, Singapore is also known for trees that fall and kill, especially given its tropical storms .Climate change theory states that storms will become more frequent and intense as the Earth heats up,so one can expect more trees to be uprooted and cause even more fatalities.
Storms will happen and trees will fall ,  but Singapore is probably the only country in the world that has the data required to determine where each and every tree will fall as a result of wind and soil erosion (caused by wind, water and displacement: Singapore, you see has actually catalogued every tree in a massive GIS database of some half a  million trees.
With that type of data it is then quite easy to forecast where trees might fall, and act accordingly.This is a simple and relatively cheap exercise which has not been undertaken. Meanwhile, as with most of the climate change debate, the emphasis in Singapore has been on grand plans costing hundreds of billions that will , in the style of Marvel super heroes, save Singapore and the world.
END

Posted by Ganesh Sahathevan at 9:03 AM