Singapore is getting hotter-think trees,people and Singapore's physical limits, before fossil fuels and "climate change". 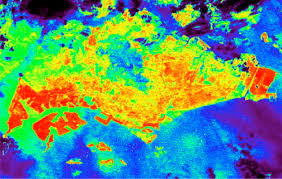 As a visitor to Singapore over a period of some five decades it does seem to this writer that Singapore is at present noticeably hotter than Kuala Lumpur.

This writer noted in 2011(see article below) that at some point Singapore will come its physical limit.The hotter environment may well be an indication that that time is near.

In that regard a climate tax may well be what is needed;not to curtail the use of hydrocarbons but to as literally a tax on the living.
That might provide the revenue needed to build up, build down and maybe buy surrounding islands.

When Singapore's former Minister for National Devepoment Mah Bow Tan suggested that the country's optimal population would be about 6.5 million people, none other than Lee Kuan Yew himself argued against the idea, asserting that a lower number of 5.5 million people would be more bearable, allowing for the preservation of open spaces and comfort.As he put it 'I think there's an optimum size for the land that we have, to preserve the open spaces and the sense of comfort.'
(http://app.mfa.gov.sg/pr/read_content.asp?View,9332,).

As a largely built environment Singapore is susceptible to the phenomena of heat islands, which is defined as "the phenomenon whereby urban areas are warmer than rural areas,largely due to the replacement of natural land cover with pavement,buildings and other infrastructure".
(http://app.mewr.gov.sg/data/ImgUpd/NCCS_Full_Version.pdf)

While "comfort" is somewhat difficult to define, there is little argument that
humans do not usually cope well with rising temperature.The extent of heat islands might then be a proxy for uncomfortable conditions, and their study could perhaps provide some guidance as to what an optimal population might be.

Heat islands can be measured using remote sensing data, as shown in this satellite image: 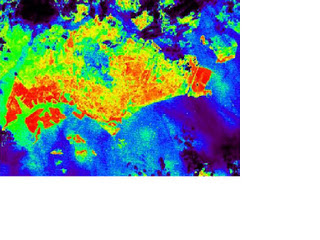 Anyone familiar with Singapore will immediately recognize the large red spot to the east as Changi Airport,clearly a "hot" area given the tarmac.It is then easy to recognise that much of Singapore is "hot".

That rising temperature due to heat islands will be an issue of national concern,quite apart from global warming ,has been acknowledged by the Singapore Government in its
National Climate Change Strategy which states among others:

Heat Stress
2.13. Warmer temperatures due to both climate change as well as the
urban heat island effect can lead to greater use of air-conditioning and
increase Singapore’s energy demand. Higher annual temperatures may also
mean more frequent and more severe episodes of warm weather, leading to
increased occurrences of heat stress and discomfort, particularly among the
elderly, the sick and those without access to air-conditioning.


The solution as the Government sees it:

2.15. The Urban Redevelopment Authority (URA) and the National Parks
Board (NParks) have been working closely to plan and provide greenery
islandwide, such as providing parks and green open spaces, and planting
along roads and around developments. URA and NParks have also been
promoting rooftop and vertical greenery on our residential and commercial
buildings through planning guidelines and incentives. The Housing
Development Board (HDB) is in the process of introducing rooftop greenery to
multi-storey carparks and residential buildings where feasible.
(http://app.mewr.gov.sg/data/ImgUpd/NCCS_Full_Version.pdf)

Singapore's population stands at about 5.1 million.Given Lee's optimum population of 5.5 million Singapore would appear to have capacity for just another 400,000 people.In other words,it appears that Singapore has almost reached the physical limits of its ability to sustain people.

However the argument outlined in the National Climate Change Strategy is for more greenery,which would probably require more open spaces,and less room for people.
The idea that HDB flat rooftops might be greened is admirable, but these are hardly going to qualify as green cover.Hence, even Lee's estimate may appear too high.

Singapore is faced with a unique problem in that its people have nowhere to go.The consequences of the problem are complex and will have to be matters for discussion in a separate posting.
END
SEE ALSO


Singapore ,1 MDB,a change of leadership & the water agreements:Singapore may even have to take blame for the impact of climate change on Malaysia's catchments


Posted by Ganesh Sahathevan at 12:18 AM