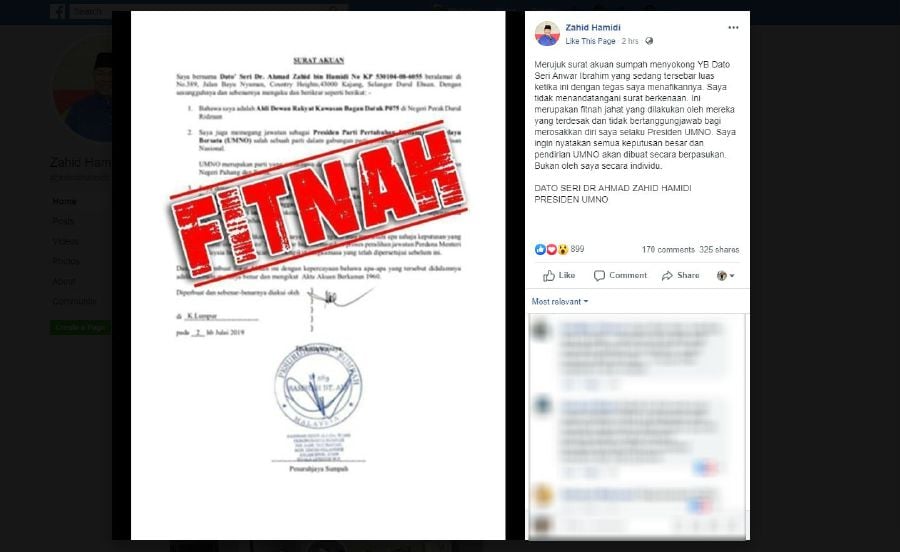 Muhyiddin, Zahid lash out at fake SDs supporting Anwar;
probe ordered-Another recent incident where Anwar Ibrahim,
not PAS or UMNO ,was said to be marshaling votes against
Mahathir

The Star has reported:

The High Court's impending decision on whether the prosecution in the SRC International trial has established a prima facie case against Datuk Seri Najib Razak is the reason behind “desperate attempts” to bring down the Pakatan Harapan government, alleges Lim Kit Siang .
The DAP adviser claimed that the Umno and PAS conspirators were desperate to cause the downfall of the government as it could no longer use the “no confidence motion” strategy to topple and destabilise the government.
“One cause of such desperation is that Nov 11 is getting closer and closer, the date the former prime minister Datuk Seri Najib Razak will know whether he walks free or will be ordered to enter his defence on seven charges of abuse of power, corruption and money-laundering involving RM42mil of funds from SRC International.

So the question that needs to be answered now:Why might Anwar Ibrahim want to frustrate Najib Razak's SRC trial?

The denial by Tan Sri Muhyiddin Yassin and Datuk Seri Dr Ahmad Zahid Hamidi of  having signed  statutory declarations in support of Datuk Seri Anwar Ibrahim taking over as prime minister beginning July 2 is irrelevant even if it were true.

A uniquely Malaysian innovation, the SD pledging support makes for good theater in the land of the wayang kulit, but otherwise means nothing. A SD is, as its name implies,  a declaration that something is true and for that reason its use is limited to declarations that say,  statements regarding ones name, identity or nationality are true.
It cannot be used to affirm ones support, affection, undying love or loyalty. These are akin to promises, for which there are contracts or deeds.

So, even if Saudara Dr Anwar Ibrahim obtains SDs of support from all MPs, that fact would mean nothing. He would still have to go back to Parliament, move a vote of no confidence against Mahathir, who would then need to advise the Yang DiPertuan Agong  that Parliament should be dissolved and a general election called.

Anwar Ibrahim's vote of no confidence against Mahathir: GE 15 must be called, and voters will expect a solid grip on 1MDB prosecutions :Australian interference will not prevent a people's revolt


Australian foreign policy advisers cannot understand that Anwar like his friend Erdogan will only make the ASEAN region more jihadi friendly.Instead,it is assumed that he will promote a more inclusive, tolerant (read LGBTQI++ friendly) Malaysia.


News reports, rumours and details suggest that Sdr  Dr Datuk Seri Anwar Ibrahim is about to make his move against PM Tun Mahathir Mohamad. It does look as if Anwar is about to do to Mahathir what he did to Ghafar Baba in 1993; present to Mahathir a seemingly united front of MPs who prefer him as their beloved leader.

It is believed that Dr Anwar's coalition will comprise both Pakistan Harapan and Barisan National MPs,for it is not felt that he will have the numbers by relying solely on Pakistan MPs. If all goes well, Anwar Ibrahim expects to be Malaysia's eight Prime Minister by the end of this week, if not very, very soon.

Unfortunately, it cannot work that way. Mahathir is PM, so a vote of no confidence against him is in effect a vote of no-confidence against the Government.A government that has lost the confidence of the majority of MPs ie the representatives of the people, must be dissolved and an election called.
To do otherwise is to have a dictatorship.

Seeking the support of Barisan Nasional Opposition MPs makes matters worse; it takes Anwar type logic to not understand that when Government MPs join with Opposition MPs to vote against the sitting Prime Minister in a vote of no confidence, Government MPs are in fact admitting that their Government has failed.Again, the only logical consequence is to call an election.

If an election is called now voters will demand that  Najib Razak and others charged with 1MDB offences be held in a solid grip, and not allowed to escape jail. There is already unhappiness with the current state of the various matters against Najib and others; call another election and voters will demand that whoever is elected show that they can do a better job of investigating and prosecuting 1MDB matters.


In this day and age foreign interference is assumed, and attempts by especially Australia to promote the Anwar-Najib cause will not go down well.

The Australian Government agency that produced the document that contains this statement continues to stand by its finding:
43.It is reported on https://www.thethirdforce.net/ganesh-sahathevan-rpk-clare-brown-ginny-stein-and-the-blood-money-trail/ that Mr Sahathevan was investigated for blackmail, extortion, bribery and corruption defamation

The "Thirdforce" story suggests that then opposition leader Tun Mahathir  financed this writer and others in  a scheme to fabricate false allegations against then PM Najib Razak with regards 1MDB.

The suggestion is expressed in    this linked Thirdforce story:
Which is why, you now have fellows like Ganesh Sahathevan telling you that Trump was forced to expand his powers just to resolve the 1MDB issue. Ganesh was paid USD1 million by a member of team Mahathir to float the idea (READ FULL STORY HERE) while Kit Siang prepped the Red Bean Army (RBA) with one-liners that accused Trump of being anti-Islam.

The Australian Government has made no secret of its preference for Najib and Anwar over Mahathir and the above seems to be an attempt to exonerate Najib , discredit Mahathir, and pave the way for "PM in waiting" Anwar Ibrahim's ascendancy to the prime ministership.

Australia has done much over the years to nurture Anwar in whatever way possible (a story for another posting) but that should not surprise. In 1994 former Chief Of Police Malaysia Rahim Noor discovered that the Australian Secret Intelligence Service (ASIS) had  recruited members of the then opposition to undermine the Malaysian government  of the day.See stories below.


News; International News
Proof Of Opposition Spying For ASIS - Malaysian Police
168 words
3 February 1994
The Age
9
English
Copyright of John Fairfax Group Pty Ltd
Kuala Lumpur, Wednesday. Malaysian police had uncovered evidence to support claims that opposition politicians spied for the Australian secret service, the top police officer said today.
The Inspector-General of Police, Mr Abdul Rahim Mohamad Noor, said preliminary investigations had uncovered the evidence, the national Bernama news agency reported.
He did not disclose details but said police had set up a committee to investigate.
The `Sunday Telegraph' in Sydney on 16 January quoted former agents of the Australian Secret Intelligence Services (ASIS) as saying they paid senior opposition politicians in Malaysia and Singapore without Canberra's knowledge or consent.
Mr Lim Kit Siang, the leader of the largest opposition Democratic Action Party (DAP), has described the allegations as ``preposterous''.
``ASIS must be very stupid to be recruiting agents from the opposition as I cannot imagine what secret information DAP leaders could lay their hands on which would be of use to the Australian spies,'' he said. _Reuter
Document

Malaysia
Australia unwilling to help in graft probe, says KL
325 words
15 May 1994
Straits Times
English
(c) 1994 Singapore Press Holdings Limited
KUALA LUMPUR - Malaysia could do very little about Australia's unwillingness to co-operate with a police investigation into allegations that Australian spies bribed politicians here, Law Minister Datuk Syed Hamid Albar said yesterday.
"If they don't want to co-operate or do not want to allow us to take evidence, then it is within their right not to do so," he told reporters after talks with visiting Iranian Oil Minister Gholam Aghazadeh at his office here.
Inspector-General of Police Tan Sri Abdul Rahim Noor was quoted as saying on
Friday that police had been denied permission by the Australian government to interview editors and reporters about the allegations.
Australia's Sunday Telegraph in January quoted former agents of the Australian Secret Intelligence Service (Asis) as saying that they paid senior opposition politicians in Malaysia from the time they were junior members of Parliament, without Canberra's knowledge or consent.
The Canberra Times weighed in with a report several weeks later saying that Asis had paid politicians from the ruling National Front coalition government up until four years ago.
"We would suggest that it would be better for countries that have made allegations against a country to allow that country to get to the bottom of the allegations so that the truth will prevail," Datuk Syed Hamid said.
He added that the co-operation of the Australian government would enable the
government to investigate the allegations and, if necessary, to take action against the parties involved.
"The investigation will identify which opposition party is involved and whether there is any criminal act to enable us to take action," the Law Minister said.
Malaysia and Australia have only recently smoothed over a row that began whe n Australian Prime Minister Paul Keating called his counterpart, Datuk Seri Dr Mahathir Mohamad, a "recalcitrant" for boycotting a summit of Pacific Rim nations last November. - Bernama, Reuter.
Document STIMES0020050711dq5f03tls