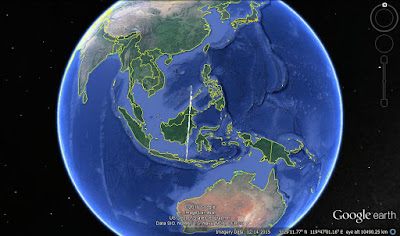 As previously reported on this blog China appears to be building a radar
array across the South China Sea ,Indonesia and quite likely with a
dog-leg extension to Darwin.Extending the array into the Phillipines
would mean greater coverage of the Northern Pacific .

The following has been reported by Eliza Gritsi of Technode:

As reported by this writer, China appears to be building a radar array that stretches from the South China Sea to Darwin, aimed at any US incoming assets (see story below).The above extends the array to the Philippines and hence the Pacific(see story and graphics below).

by Ganesh Sahathevan
The Wall Street Journal has just reported that China Appears to Have Built Radar Facilities on Disputed South China Sea Islands(see story below)
In 2012  IHS reported that China had offered to build Indonesia a radar network " that will have sites in Lombok, the Sunda Strait, western Borneo and the south-west coast of Sulawesi."
As the illustrated on the Google Earth map above , one can draw s straight line from The Spratlys to Lombok. western Borneo and the south-west coast of Sulawesi lie in between.
It does seem as is China intends or has already in place  a radar array,clearly aimed at  American military and civilian  assets.

This image shows why the Port of Darwin is an important part of that network.

Posted by Ganesh Sahathevan at 6:10 PM