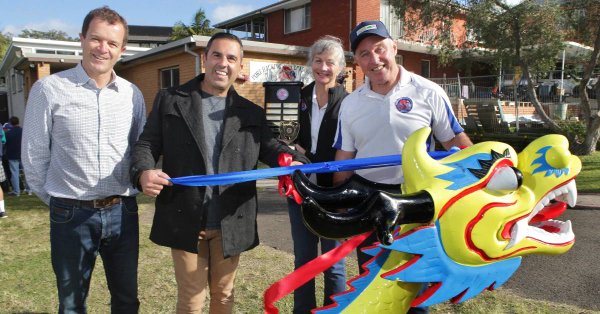 While experts continue to debate the reasons the general public, and even the NSW Premier, weren’t notified of the Chinese naval visit, one group of people were more than prepared for the arrival.
Photos from yesterday show members of the Chinese community waiting to greet the warships in Sydney Harbour. Members of the public hold Chinese flags on the wharf as the three ships arrive in Sydney. Picture: Bianca De Marchi/AAPSource:AAP People are questioning how some members of the public knew about the arrival when no one else seemed to. Picture: Bianca De Marchi/AAPSource:AAP
Onlookers proudly waved Australian and Chinese flags as the ships made their way into the harbour.
It is clear members of the local Chinese community had access to information of the naval arrival that the rest of the public didn’t.
There have been suggestions the information was disseminated on Chinese social media site WeChat.

This incident suggests that there is a gaping hole in human intelligence in NSW;if a whole community could be informed to await and greet the arrival of three warships at Sydney Harbour, what more smaller communities greeting and providing logistical support for say jihadis executing a Mumbai style swarm attack?
END

The Threat from Swarm Attacks: Case Studies from the North Caucasus

Posted by Ganesh Sahathevan at 7:06 PM