Nazifuddin Razak , previously photographed    with Taiwanese actress Celia Chang
has married an upcoming Indonesian politician, the 25 year old Fitri Apriansari Utami.
Wedding invitations for the 4 May 2019 event in Jakarta were sent in the names of the
parents of the bride and groom;Najib Razak and Tengku Zainah Tengku Eskandar, and Tomy and Susanty Sumardi.
Tomy Sumardi is reported to be close to the former Speaker of the Indones 2ian Parliament and  Golkar chairman, Seya Novanto.Novanto is currently serving time in jail for corruption.

Reported as is,in Indonesian and English. The  happy union seems to have not been reported. 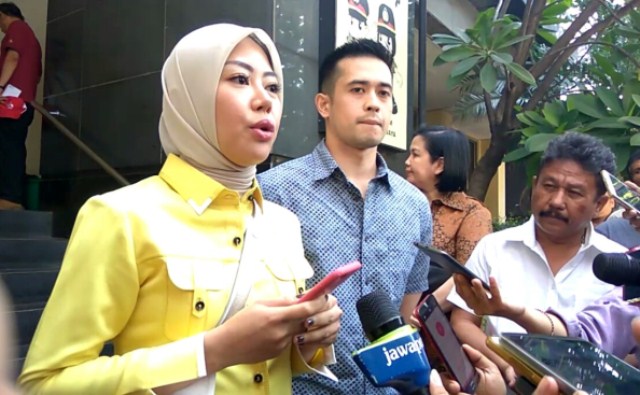 MAY 08, 2019
Jakarta. Former finance minister and Bank Indonesia governor Agus Martowardojo failed to show up to a questioning session at the Corruption Eradication Commission, or KPK, headquarters in Jakarta, where he was called as a witness in the long-running investigation of the e-KTP graft case on Tuesday.
Agus, who was finance minister during Susilo Bambang Yudhoyono’s second term as president, was supposed to give explanations in an e-KTP graft case involving former Golkar Party politician and House of Representatives (DPR) member Markus Nari.
The massive e-KTP graft case has ensnared many top names in Indonesian politics. Markus, the eighth name to be charged in the case, was arrested by the KPK last month.
The case has also involved two officials at the Home Affairs Ministry, Irman and Sugiharto, the president director of IT consulting firm Quadra Solution Anang Sugiana Sudihardjo and Andi Agustinus a.k.a. Andi Narogong, a businessman who was influential in the e-KTP project.
Three other prominent names currently serving jail sentences in the case are former House speaker and Golkar Party chairman Setya Novanto, his nephew Irvanto Hendra Pambudi Cahyo and another businessman, Made Oka Masagung.
"One witness did not appear in the questioning session involving suspect M.N. [Markus Nari], and that's Agus Martowardojo," KPK spokesman Febri Diansyah said at the agency's headquarters on Tuesday.
It is not known yet why Agus was absent from the investigation.
"We are trying to obtain information on why the witness [Agus] failed to attend the questioning," Febri said.
Agus has been questioned multiple times already as a witness in the case. On Tuesday, he was supposed to explain how he had given his approval as Finance Minister to financing changes in the e-KTP project, which was funded by the state budget.
Former Democratic Party treasurer Muhammad Nazaruddin, a whistleblower in the case, said Agus played an important role in smoothing out the e-KTP project.
He said that without Agus' approval as finance minister, the e-KTP project would never get off the ground. The project used a multi-year scheme that was later rejected by Agus' successor and current finance minister Sri Mulyani.
The KPK named Markus as a suspect in the case in July 2017 for allegedly "breaking the law to enrich himself, other people or a corporation" in the procurement of the electronic identification cards in 2011-2013, swindling Rp 2.3 trillion ($170.8 million) from the total budget of Rp 5.9 trillion.
Markus' role was to smooth out negotiations and mark up the e-KTP budget in his capacity as a lawmaker at the DPR. In his trial, it was revealed that Markus and his accomplices had demanded Rp 5 billion in bribes from Irman in 2012.
The KPK had previously charged Markus for obstructing the investigation and prosecution of another graft case related to the e-KTP project.

Posted by Ganesh Sahathevan at 7:52 PM