Sale of MV Equanimity: Lawyers have done quite well;and the amounts paid are intriguing. 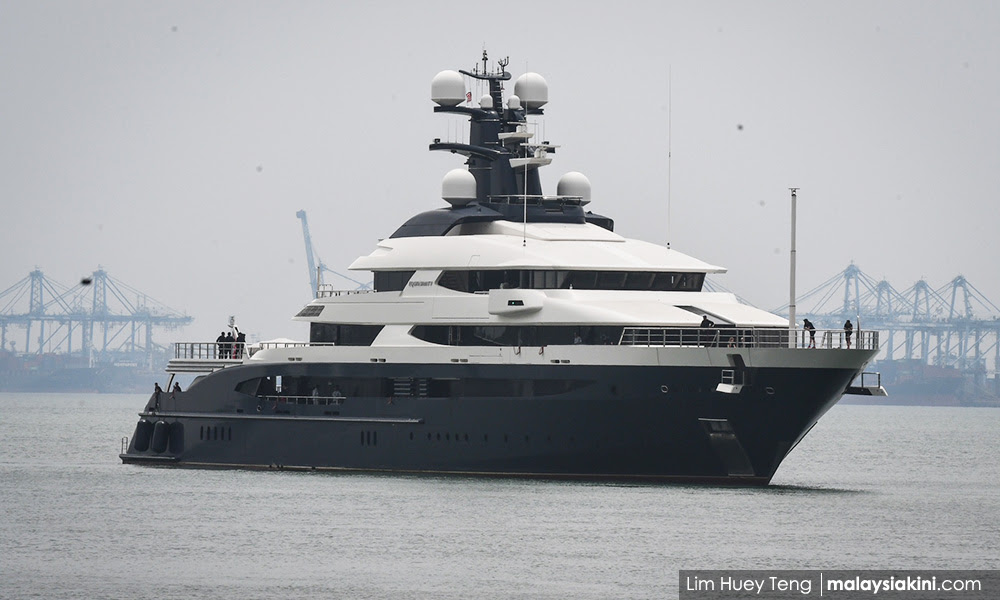 The lawyers involved in the sale of the yacht Equanimity seem to have done quite well.

Messr Joseph & Partners a three partner ,one associate firm was paid RM 1.6 Million, or gross fee per employee of RM 400,000.

Mr Ong Chee Kwan of the Singapore law firm Rajah & Tann was paid RM 360,000; the payment appears to be to him personally rather than his firm.

The boat is expensive, but it is hard to see that its cost should have anything to do with the quantum of fees.

Finally, Holman Fenwick Willan of the UK, managed a fee of RM 40,000 or STG 7374.89. This component of the legal costs incurred is intriguing; in this writer's experience that amount would normally, at a firm the size of Fenwick,pay for,at best, file opening and perhaps an hour's worth of partner and junior solicitor time.

END
References
A breakdown of the costs incurred is as follows:

Published: 6 May 2019, 3:49 pm  |  Modified: 6 May 2019, 3:49 pmAttorney-General Tommy Thomas has provided a breakdown of the costs incurred after concluding the seizure and subsequent sale of the superyacht Equanimity, which was purportedly acquired using stolen 1MDB funds.
In total, Thomas said around RM15.5 million was expended in arresting the superyacht on Aug 6 last year and maintaining it for nine months until April 25, before it was delivered into the possession of a Genting Malaysia Bhd subsidiary, which purchased the vessel for US$126 million (RM522 million).
"The sum of RM15.5 million is not the final figure. However, we are confident that the remaining expenses would be much less.
"In relative terms, this sum, which works out to about US$3.75 million, is a petty sum for services rendered by all concerned for nine months.
"If the arrest had been undertaken anywhere else in the world, the cost would have been two to three times more.
"Further, no commission is payable to the broker because it is a directly negotiated sale," he said.
A breakdown of the costs incurred is as follows:
Elaborating on the breakdown, Thomas said RM407,000 was spent on berthing charges at Boustead Cruise Centre in Port Klang between August to November 2018.
He added that the Royal Malaysian Navy subsequently allowed the Equanimity to berth at its naval base in Langkawi without any charges, starting from November 2018, until it was delivered to its purchaser.

As for the RM12.7 million in operational costs, Thomas said it included local agency fees, professional management fees, salaries and transportation for the professional crew, protection and indemnity insurance, as well as hull and machinery insurance.
Furthermore, he said the costs also included “food and supplies required by the Equanimity," as well as parts, equipment and services rendered for the necessary repairs and maintenance of the superyacht.
As for the RM400,000 spent on the independent valuation service, Thomas said it was to engage a reputable valuer and appraiser of international standing.
"Such an engagement is a necessary requirement for a judicial sale," he said.
Payments screened on multiple levels
With regard to legal fees, RM1.6 million was expended for Messrs Joseph & Partners, who acted as solicitors for the Malaysian government and 1MDB group of companies, while RM360,000 was also paid to lawyer Ong Chee Kwan as counsel fees.
Another RM40,000 was paid to Messrs Holman Fenwick Wilan for foreign legal advice and to deregister and reregister a vessel in a Red Ensign jurisdiction.
As for lead counsel Sitpah Selvaratnam (photo) who acted for the Attorney-General's Chambers, no charges were incurred.

"Sitpah conducted this case on a pro-bono basis, for which I again express our indebtedness.
"Alice Loke and Rahayu Mumazaini of the AGC also played vital roles in the expert legal team advising on this specialist branch of the law," he said.
Thomas stressed that there were "multi-layered" screenings and approvals in making the payments, adding that the legal and accounting team served as the first filtering layer.
"Once approved, invoices were submitted to my office for a second screening, and thereafter by the sheriff of the Admiralty Court," he said.
"It was only after the invoices were cleared by the three levels were they submitted to the board of directors of 1MDB for payment approval.
"For legal fees, all invoices were accompanied by detailed timesheets, particularising the tasks undertaken for each hour charged in the invoice and supporting documents for disbursement incurred. The timesheets were scrutinised by the AGC."
Proceeds to repay 1MDB debt
Thomas said the sale demonstrated the capacity of the Malaysian legal system to perform world-class services in a specialist branch, namely admiralty law, and for ancillary supporting services to keep the superyacht in a good and safe condition for nine months.

He said the full receipt of the purchase price of US$126 million was delivered to the court-appointed stakeholder on April 23, with due execution of the bill of sale by the sheriff of the Admiralty Court on April 24.


The vessel was then delivered to Genting's subsidiary on April 25. The company has since renamed the vessel as Tranquility and moved it to Singapore.
"The purchase price will be kept by the stakeholder until the expiry of a 90-day period, during which the legal team will move the court for leave to gazette the receipt of payment, for taxation of costs, and determination of priorities for payment out of the proceeds.
"It is only after these Orders of Court that the monies will be credited into a segregated 1MDB asset recovery account, that was set up solely to recover 1MDB assets to pay off 1MDB debt," he said.
The superyacht was seized off the coast of Bali in February 2018 in a joint operation between Indonesian police and the US Federal Bureau of Investigation. It was subsequently surrendered to Malaysia.
Businessperson Low Taek Jho, a fugitive wanted for the alleged multi-billion ringgit theft of 1MDB funds, is said to have commissioned the construction of the vessel using the ill-gotten gains.
Former prime minister Najib Abdul Razak is also standing trial for the 1MDB scandal.
International investigators believe at least US$4.5 billion (RM18.67 billion) was misappropriated from 1MDB and laundered through the global financial system.
Posted by Ganesh Sahathevan at 5:16 AM