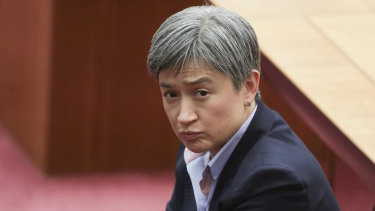 The ABC has reported:

This writer assumes that readers are aware of Mahathir's history.especially with his former deputy, the "prime minister in-waiting", Anwar Ibrahim.


Having said that,perhaps Ms Wong is simply echoing DFAT's aspirations for a LGBT friendly Malaysia which must come to pass when (not if) its long time hero Anwar Ibrahim becomes PM (soon, very soon).See:

Meanwhile, Wong  may have to delay that official visit to Malaysia,regardless of the message she feels she can bring.
END

Posted about 2 hours ago


The shadow foreign minister gave a major speech at the Lowy Institute in Sydney today, laying out Labor's foreign policy priorities ahead of the May 18 election.

Ms Wong vowed if Labor won power her first trip overseas would be to Indonesia and to Malaysia, where she was born.

And she suggested her presence on the international stage could help undermine stereotypes about Australia being largely white or a virulently racist nation.

"There are times when Australia's past attitudes on race can be evoked in ways which are neither accurate nor helpful.

"This was brought home to me during the first iteration of Pauline Hanson, when my father, still living in Malaysia, asked me if I would need to leave Australia.

"But just as historical negatives can be evoked, so too they can be shifted."

Senator Wong said when she represented Australia on the international stage in the past, it was perceived by other nations to be the move of "an independent multicultural Australia confident of our place in the world."


"What is significant about that possibility is not my personal attributes — but rather what would be significant about an Asian-Australian being our foreign minister is what it says about us," she said.
Foreign affairs matters have barely featured in this election campaign, and there are broad swathes of bipartisan agreement between both major parties on several key foreign policy issues.

Australian policy makers have struggled to deal with Beijing's increasingly assertive and authoritarian behaviour both at home and abroad.

Senator Wong told the Lowy Institute the Coalition had mismanaged the China relationship, vowing to bring a "more considered, disciplined and consistent approach".


But she also warned the shifting balance of power in Asia meant a Labor Government would need to "redefine" its relationship with Beijing.

Australia could no longer simply seek security from the United States while trying to quarantine vital economic ties with China, she said.


"It is not simply a matter of a diplomatic reset. Fundamentally, we are in a new phase in the relationship," Senator Wong said.

"The idea of an economic-strategic bifurcation was never really accurate, and certainly is not now."

Senator Wong did not give specific examples of how a Shorten government might shift policy on China, but she repeated Opposition Leader Bill Shorten's approaches that while Labor would not "pre-emptively frame China only as a threat" it would need to face the "reality" that it was not a democracy either.


"China is not a democracy, nor does it share our commitment to the rule of law," she said.

"Differences between our systems and values will inevitably affect the nature of our interactions. But those realities include the fact that China will remain important to Australia's prosperity."


Debate over China has become increasingly furious, with Australia pushing back against foreign interference by the Chinese Communist Party.

And it intensified after the Government decided to ban the Chinese telco Huawei from taking part in Australia's 5G rollout.

Senator Wong said some analysts presented a polarised vision of a future in which Australia would have to choose between the United States and China.

"[It is] far better if we have a more productive conversation about what lies between and beyond those extremes," she said.

And she scolded both big business and the strategic community for "talking past another" on China instead of listening to alternative points of view.
Posted by Ganesh Sahathevan at 4:36 AM