The diagrams  below published by the Malay Mail which illustrate the cash flows relied on by the prosecution to prove the charges against Najib Razak reveal an interesting use of Islamic banking facilities  (which by nature are profit sharing arrangements between bank and client)  and inter-posed charitable trusts (which are meant to be discretionary)  to break-up what can appear to be simple linear flows into discrete seemingly independent packages.

These arrangements create problems for many, but especially the ANZ Banking Group Ltd whose management oversaw these transactions.It is management's duty to ask questions about transactions of this type.Instead, ANZ CEO Shayne Elliot continues to distance himself from the problem. going so far as to claim that he was not a member of  the AMBank board oed.f  directors when these transactions were executed, when in fact he was. 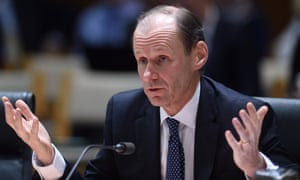 The Guardian reported this response from ANZ CEO Shayne Elliot to the House of Representatives Economics Committee  when questioned about the 1MDB money laundering scandal:

Adam Bandt has quizzed the ANZ executives about its role sitting on the board of Malaysian bank AmBank which held billions in the 1MDB funds at the centre of a global financial scandal.
More than $US1bn is alleged to have flowed into Malaysian prime minister Najib Razak’s bank ­accounts between January 2011 and April 2013 — much of it from 1MDB.
ANZ chief executive Shayne Elliott says he is satisfied nobody employed by ANZ did anything wrong and the bank was not being investigated by the US Justice Department.
He says the bank has no relationship with 1MDB, or link to what is alleged to have happened.
This response is disingenious at best, for the issue was always , and remains, as reported above , ANZ and AMBanlk's  collusion in Najib's laundering of funds misappropriated from 1MDB:

ANZ has since its acquisition of  an interest in AMBank   "significant management and operational influence" over AMBank (see See Page 29 of the ANZ announcement to the SEC),and has a special relationship with Najib over and beyond that of client.As PM and Minister for Finance ANZ had been in active negotiations with Najib to increase its stake in AMBank.

by Sarah Thompson and Jamie Freed

From little things big things grow – until you hit a foreign ownership cap.
Some welcome news for ANZ Banking Group’s Asian strategy has emerged from Malaysia. The country’s Prime Minister, Najib Razak , has reportedly said he was open to allowing ANZ to increase its stake in Malaysian bank AmBank Group above the 30 per cent foreign ownership cap to 49 per cent.
Malaysia provides some of the highest returns on equity for banks anywhere in the world and ANZ has a toe hold with a 24 per cent stake in AmBank, the country’s fifth-largest lender.
ANZ has been looking at ways to either become bigger or get out of its minority holdings in Asian banks, and Najib’s comments provide a welcome sign that Asian countries may be looking to ease their rules to attract greater foreign investment.
Deutsche Bank yesterday said a greater stake in AmBank would be an attractive fit with ANZ’s Asian expansion strategy. Malaysia certainly ticks Asia chief Alex Thursby ’s boxes of growing fast while having lots of savings in its bank deposits. AmBank’s shares are also trading at an attractively low valuation at 1.8 times book value.

General banking, mortgage and instalment lending, life insurance, property development, leasing, hire purchase and general finance, international and investment banking, investment and portfolio management and advisory services, nominee and custodian serv
http://www.anz.com.au/
Banks (401010)
ASIC 005357522
View all announcements
Buying another 25 per cent stake in the bank would cost ANZ about $1.5 billion assuming no takeover premium, Deutsche reckons. Given ANZ has about $3.5 billion in surplus capital this would not be a stretch.
Of course the downside is ANZ would still find itself as a minority shareholder in a bank, with no clear path to complete control.
The Australian Financial Review


Posted by Ganesh Sahathevan at 9:51 PM