. @LCAPresident Arthur Moses SC delivered an outstanding speech. Such a gathering would have been unthinkable just a year ago! 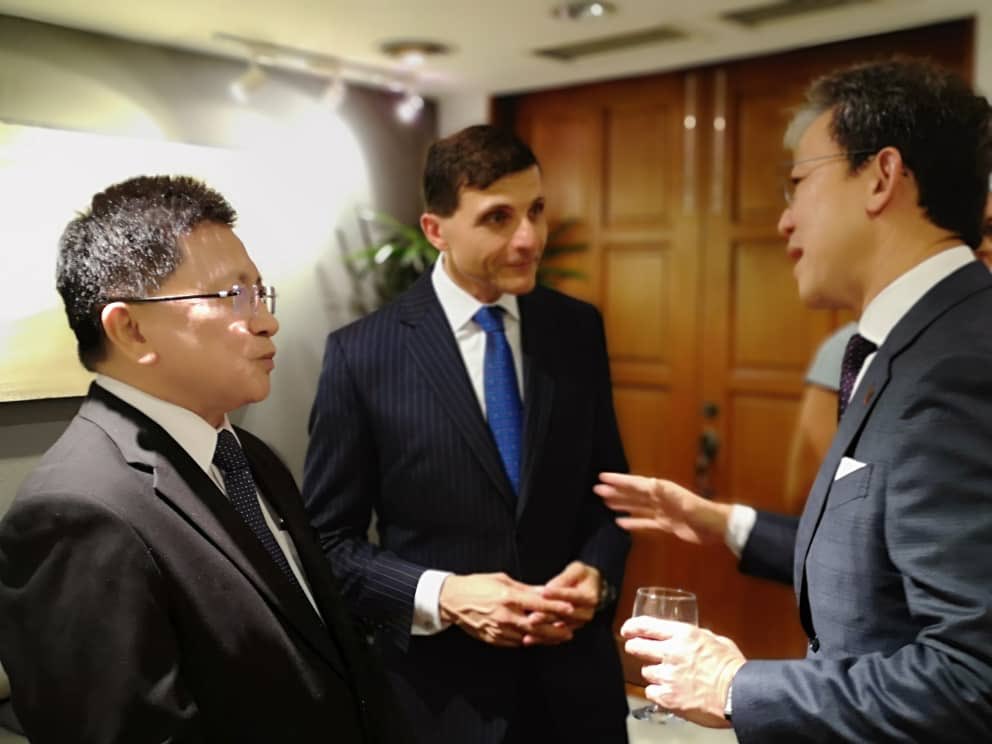 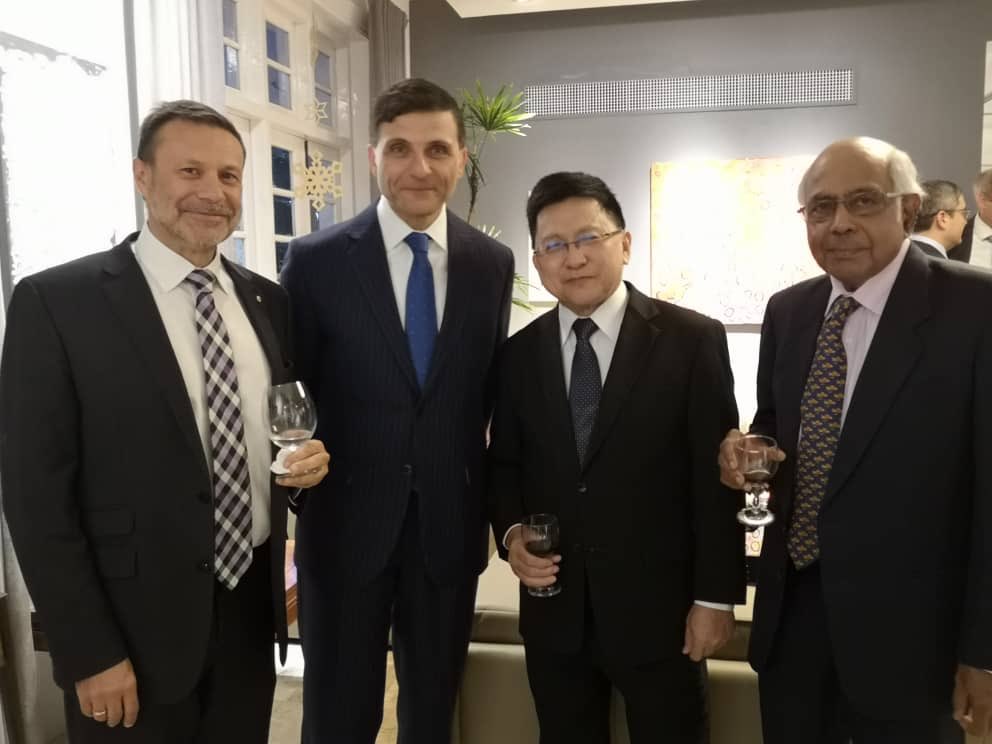 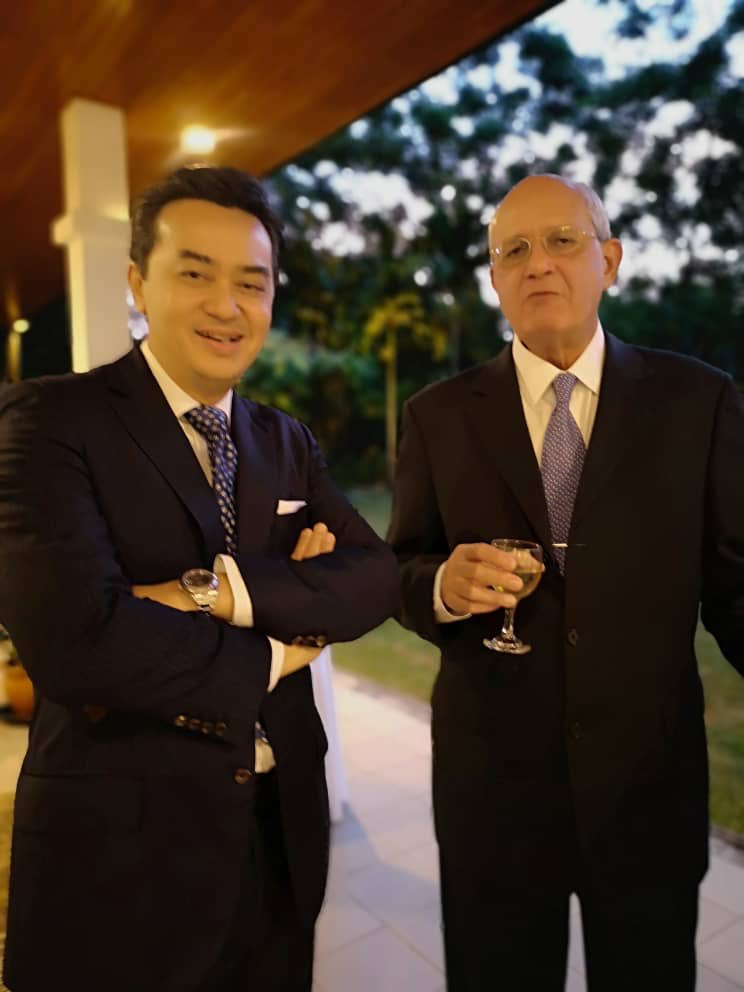 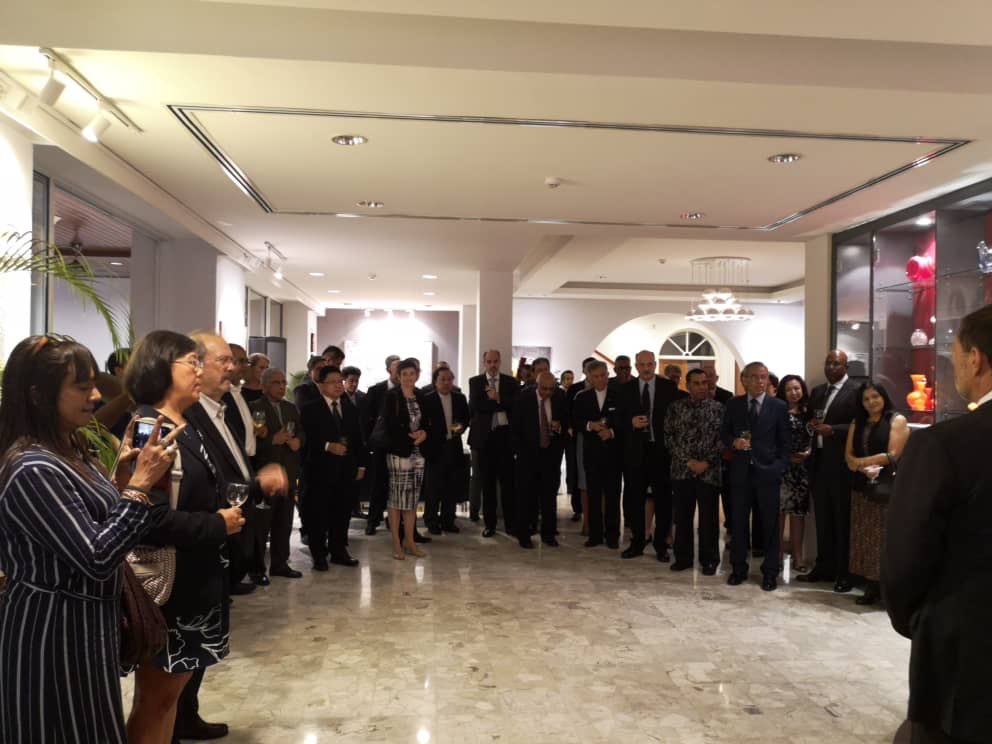 Hard to understand what the High Commissioner means by saying:
Arthur Moses SC delivered an outstanding speech. Such a gathering would have been unthinkable just a year ago!

A year before, in January 2018, anything attacking Mahathir have been more than welcome by the then Najib government. The photograph above was taken in mid-to late January 2019 .Law Council of Australia President, Arthur Moses SC, travelled to Malaysia and Hong Kong for his first official engagements to open the legal year.In Kuala Lumpur Mr Moses  was "invited to give an address at the Australian High Commission, attended by members of Malaysia’s judiciary, including Chief Justice Tan Sri Datuk Seri Panglima Richard Malanjum, members of the Malaysian Bar Association, and High Commissioner to Malaysia, Andrew Goledzinowski AM."
In his speech Mr Moses decided to re-visit the 1988 dismissal of then Chief Justice Tun Salleh Abbas:He said:
It has been 30 years since the 1988 Judicial Crisis, which saw the Lord President of the Supreme Court of Malaysia, Tun Salleh Abas, dismissed for “judicial misbehaviour”. His crime – speaking out publicly in defence of the judiciary. The crisis saw two other Supreme Court Judges also removed from the bench. Two decades on, in 2008, an Eminent Persons Panel convened on the initiative of the Malaysian Bar found all three had been improperly removed from office, and that Prime Minister Mahathir’s involvement in the crisis had been "unmistakably a direct unabashed attack on the rule of law with intent to subdue, if not subvert, the independence of the judiciary". Though what happened in 1988 was unacceptable, it has steeled Malaysia’s legal fraternity with an unrivalled strength and determination.

This direct attack on Mahathir is intriguing, given that he has been recently re-elected prime minister (despite it seems the disapproval of Mr Moses, the Australian Government, and the Australian legal fraternity), and given that over the the past 31 years much has been said by the key players in that incident, including the formerAttorney General Abu Talib Othman  who in January 2018 is reported to have said:
“However, he (Mahathir) was acting on the command of the then Yang di-Pertuan Agung Sultan Iskandar Sultan Ismail,” he said referring to the former Sultan of Johor.
Abu Talib said that he had seen the note – written and signed by the King – that was given to the PM commanding him to remove Salleh as Lord President and to replace Salleh with Abdul Hamid Omar.
“I went to see the PM and told him that neither he nor the King can remove a sitting Lord President, as that was against the constitution.
“It was a very challenging moment as the PM then asked, ‘can you ignore the command of the King?’. However, I advised and reminded him of the oath of office he took as PM to protect and defend the constitution,” he said.
Abu Talib said that Mahathir advised him to inform the King personally and he did that, going to Johor for the meeting.
“The King insisted that action be taken, despite me saying that neither him nor the PM could remove a sitting Lord President.
“He (the King) instead suggested that it be done in accordance with the constitution. So, I went back to the PM, and informed that any action taken must be done in compliance with the constitution......”
It is important to recall that Talib Othman made these public statements in January 2018 when almost everyone believed that then PM Najib Razak would be re-elected, despite Mahathir's determined (and eventually successful) challenge to Najib  and his party's control of the Malaysian Government. Malay politics dictate that punishment must follow any show of support for the opposition against the  ruling chieftain, and Talib would have understood that.
All this seems to have escaped DFAT and Mr Moses, who was probably in Kuala Lumpur promoting Australian legal services. The President of the NSW Law Society Ms Elizabeth Espinosa was also present at that event at the Australian High Commission (see photo above).

As this writer has noted before, DFAT has not hidden its preference for Anwar Ibrahim as prime minister. Nevertheless, promoting a trade mission based on that sentiment does not
seem a winning strategy.

Diplomatic incident brewing: Mahathir declares Raja Petra a liar,AG NSW and his department insist that RPK is a credible source of information about Mahathir

Readers of this blog and its related Realpolitikasia blog will recall that a Department Of Justice NSW,Australia, document considers this article to be credible:

Ganesh Sahathevan, RPK, Clare Brown, Ginny Stein and the blood money trail.
The story by one Raggie Jessy Rithaudeen states that all the above named and others at the Australian Broadcasting Corporation were paid by Malaysian Prime Minister Mahathir Mohamad millions of dollars to fabricate stories about the 1MDB theft by former PM Najib Razak.


The Thirdforce website is co-hosted on the Malaysia-Today website, which is published by one Raja Petra Kamaruddin who is known as RPK.RPK published the above story on his own website.


Last Friday PM Mahathir told reporters in Malaysia:
“Raja Petra Kamarudin is a liar and you still believe him......”

The  Department Of Justice NSW, and its Minister, the Attorney General NSW Mark Speakman SC  have refused to retract their reliance on the Malaysia-Today/Thirdforce article, despite the obviously false claims in the article, which also claims that Mahathir's payments to the ABC are part of a conspiracy which involves Tony Blair, Donald Rumsfeld, George Soros and he.

Mahathir calling RPK a liar sets the Department,its minister the AG NSW,and the Federal Government on a diplomatic collision course with the Malaysian Government.
Not a bad effort for a state government department whose minister is MP for a constituency better known for its surf.
END

Australia’s famously prickly relationship with former Malaysian leader Mahathir Mohamad might not be less tempestuous a second time around with the 92-year-old now seeking re-election as the opposition candidate, and flagging concerns over Canberra’s “Pacific solution” for asylum-seekers and warning “I am not a nice person”.
Only weeks from a likely election battle, Dr Mahathir conceded bilateral relations with Australia are better under current Prime Minister Najib Razak — whose scandal-plagued government is accused of trying to secure re-election through unfair boundary ­realignments and voter incentives — than they were during his 22 years as leader.
Dr Mahathir, who frequently sparred with Australian journalists and was memorably branded a “recalcitrant” by Paul Keating for boycotting the 1993 APEC summit because he favoured an ­exclusively Asian caucus, said ­Malaysia would continue to enjoy good relations with Australia if he was re-elected leader.

But, he said: “It would depend on the situation. I don’t like the way some new immigrants are being treated, the way some boatpeople are being sent to the Pacific Islands, kept there and actually imprisoned there.
“Does it mean I should not say it? I would speak the truth. I don’t try to win support by being very nice. I am not a nice person,” he said with a smile.
On the question of Australia joining ASEAN, which arose ­before last weekend’s Sydney summit when Indonesian President Joko Widodo said he would welcome their membership, Dr Mahathir, 92, said that while “geographically” it made sense for Australia to join the 10-nation group it might not be a good cultural fit. “In terms of sentiment, culture, there is a need to understand East Asian culture on the part of Australia. Some Australian leaders are quite insensitive.”
Dr Mahathir quit Malaysia’s ruling UMNO party in 2016 after speaking out over the alleged misappropriation of more than $US4.5 billion from 1MDB, a state development fund chaired by Mr Najib that the US Department of Justice has described as the worst case of kleptocracy it has seen.
In January he announced a previously inconceivable alliance with the opposition coalition led by his one-time deputy and political nemesis Anwar Ibrahim, who is serving a second prison term on politically motivated sodomy charges and is due to be released in June. Both men have said the ­alliance was driven by an urgent need to topple Mr Najib and UMNO, the party that has formed every Malaysian government since 1957.
Under the partnership, Dr Mahathir will stand as prime ministerial candidate for the opposition Pakatan Harapan and if elected, seek a royal pardon for Dr Anwar on his release so that he may take over the premiership.
“I will not be a passive seat warmer,’’ he said. “The reason why they (opposition) chose me is because of my past ­experience. I know what to do in the first 100 days of becoming prime minister. I have to democratise the country again. I have to limit the powers of the prime minister’s ­office, restore the rule of law.
“All these things I can do in a short time. The big problem comes with the money (Najib) has borrowed, money the country can never repay. The central bank says the debt is more than 800 billion ringgit ($264bn). That will be ­difficult to tackle but I know where some of the money is.”
While his promises to restore democracy have raised some eyebrows in Malaysia, including among opposition politicians jailed for civil dissent during his premiership, Dr Mahathir insisted yesterday: “I am not a dictator.
“When I was in government I did not exercise the kinds of ­powers that Najib does. He does not respect the rule of law at all or the constitution,’’ he said.

Email ThisBlogThis!Share to TwitterShare to FacebookShare to Pinterest
Posted by Ganesh Sahathevan at 6:27 AM