Najib's SRC trial: AmBank manager R. Uma Devi is not the only source of evidence;other more important bits of evidence appear to have been ignored. 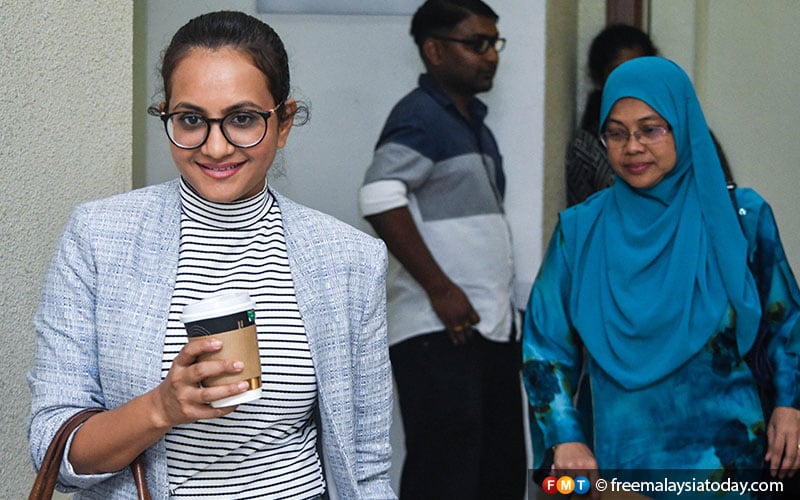 Ambank manager Uma Devi (left), who testified at the trial of Najib Razak. There seems to be an unhealthy reliance on her testimony.
The Straits Times and others have reported today:

A sum of RM1.9 billion (S$626 million) was credited into one of Malaysia's former premier Najib Razak's private bank accounts between 2011 and 2013, the High Court heard on Monday (April 29).
Part of the money was purportedly a donation from one "Prince Faisal al Turki" and the Finance Ministry of Saudi Arabia.
This was confirmed by AmBank manager R. Uma Devi during cross-examination by Najib's counsel Harvinderjit Singh.
Meanwhile, this writer had, in 2015,  analysed bank remittance documents placed in the public domain by WSJ  which suggested that the remittance into Najib's account was not a donation. This writer and others had expected, in 2015, that a change of government would allow investigation  of the details disclosed in the documents but that appears not to have been done.Had it been done, the prosecution would not have to rely solely on Ms Uma Devi's testimony about Najib's bank statements.
That would be no need to allegedly purport anything.
END


On the matter of the US$ 681 million donation to Prime Minister Najib Razak: Sender did not describe payment as a donation

by Ganesh Sahathevan
The Malaysian Prime Minister Najib Razak has said that  someone has sent him a donation of US$ 681 million, via Wells Fargo Bank of New York, using a BVI company (since liquidated) called Tanore Finance. That company was a client of Falcon Private Bank Of Singapore, which was the ordering institution for that wire transfer.

The Wall Street Journal which broke the story of that massive "donation" has placed on-line the relevant documents.

Readers are referred to pages 2 and 3 of the documents,and to the items marked70-Remittance Information.
Curiously the transfers  (the sum total was paid in two amounts)  are  described as  "Payment" and not " Donation".
This is not a matter of mere semantics.In these days of heightened controls on the transfer of funds, given the fear of terrorist financing, descriptions are important , even for very small sums. In this case where that large amount of money was being transferred to an individual the description becomes even more important.


Readers may also be interested in item 71A Details o Charges
"SHA" means charges are shared and it is again curious that such a generous donor would want the recipient to share in the charges for the transfer.
Posted by Ganesh Sahathevan at 5:02 AM