by Ganesh Sahathevan
This story tells itself:

All well  and good but let us hear what  Michelle herself has to say about this decade old question:

KUALA LUMPUR (June 24, 2009): Azmin Ali (PKR-Gombak) today alleged in the Dewan Rakyat that former Ferrari F1 team boss Datuk Jean Todt was appointed as Malaysian Tourism Ambassador at a cost to the Tourism Ministry of some RM593,400.
Asking Deputy Tourism Minister Datuk Seri Sulaiman Abdul Rahman Abdul Taib the rationale for the appointment, Azmin said he had proof to support all his claims, including on Todt and his fiancé Datuk Michelle Yeoh being offered land on an island in Terengganu.
However, Sulaiman did not reply to his question on grounds that it has deviated from the original question and advised Azmin to put his question in writing.
Azmin stressed that the question was not out of topic as the original question from Datuk Dr Marcus Mojigoh (BN-Putatan) was about films produced by the ministry to promote Malaysia as a tourist destination.
"I have proof whereby Yeoh and Todt were offered (part of) Pulau Besar. And his flight ticket alone had cost RM360,000. The cost of his appointment reached RM593,400.
"But, he (Sulaiman) didn't want to reply. Don’t you agree with me that this is a related matter, Tan Sri?" Azmin asked Speaker Tan Sri Pandikar Amin Mulia who said it was not his duty to agree or not with him.
Later, when met in Parliament lobby, Azmin said the annual fee of RM593,400 included air tickets costing RM360,000, accommodation (RM60,000), tips, laundry, faxes and telephone costs (RM90,000) and other miscellaneous costs.
He also said Todt also received RM388,000 as travel allowance when he holidayed in Malaysia and this included RM240,000 for two air tickets and miscellaneous expenses (RM60,000).
He said Todt, in return, is required to attend a minimum of two major events in the country and two international missions to promote Malaysia.
"The ministry agreed to bear all expenses, including his holiday in Malaysia twice a year for two persons," he said, adding that he had proof to show communication between Todt and the ministry on the deal.
"Why do we need to spend so much money? I hope the ministry will clarify this before the end of the session and if I am wrong, make a statement to prove me wrong," he added.
Later, Tourism Minister Datuk Seri Dr Ng Yen Yen rebutted the claim that Todt had been given a piece of land in Terengganu for becoming a tourist ambassador of Malaysia.
She told reporters in Parliament lobby: "As far as I am concerned, Todt would never have a piece of land in Terengganu. Todt was made Malaysia’s ambassador starting in May for two years and with his connectivity in Europe and the world, it will help to promote the country's tourism as well as to promote the country as a second home."
On Azmin's claim that Todt was paid about RM1 million for his task as ambassador, Ng said: "The RM1 million is not cash for him. It is a two-year budget set aside for him when we need him to travel.
"When we want to do promotion in Europe, RM1 million is nothing. So yes, he (Todt) is allocated with a budget but not into his pocket, it is for the ministry and it will be spent accordingly."
Asked whether it was true that Todt had spent RM1 million in a year as claimed by Azmin, Ng said the Gombak MP had been misinformed as the ministry has not even started spending the money.
"He (Todt) was only appointed in early May. So I do not know where Azmin got his information. We are just preparing his budget and I hope these people get the figures correct," she said.
On whether Todt is acting as ambassador on a voluntarily basis, Ng said: "The ministry does not pay him salary but for the air tickets and expenses incurred when he is required to go and meet people.
"Azmin, as a responsible MP, should tell me where he got his information. I will bring it up in Parliament and he'd better be sure that his information is reliable. I appreciate that if the MPs want to raise something in Parliament but do not mislead the House," she added. 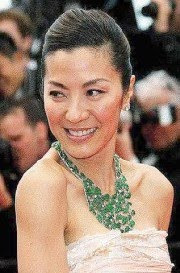 
International superstar Michelle Yeoh hopes her upcoming film The Lady, based on the life of Myanmar democracy icon Aung San Suu Kyi, will be nominated for several Academy Awards next year.
"If the media continues to give the film good publicity and reviews, it could become a reality," Yeoh told reporters during a press conference on the International Ipoh Run 2011 in Malaysia. She is the ambassador for the event.
The Malaysia-born Yeoh, who was in award-winning films like Crouching Tiger, Hidden Dragon and Memoirs of the Geisha, said she also hoped to be nominated for Best Actress for her role in the movie.
She said the shooting for The Lady wrapped up early this year, adding that the film was a great honour and tribute to the Nobel Peace Prize winner, who celebrated her 66th birthday on Sunday.
"I would like to wish her good health and stability for her country and fellow citizens. I will be actively promoting the film around the world until its premiere screening," she said.


A)
According to the U.S. State Department, the mining of rubies, as well as jade, not only helps fund the Burmese military junta, but is also at the centre of innumerable and well-documented crimes against humanity that include the implementation of forced labour in mines, the systematic rape of women and young girls, and the ethnic cleansing of opposition minority groups living near sources of mineral wealth.
http://www.dailymail.co.uk/home/moslive/article-1312382/The-curse-blood-rubies-Inside-Burmas-brutal-gem-trade.html
Myanmar's (Burma) jade and heroin trades now overlap.
http://www1.american.edu/ted/jade.htm

B)FORMER-Bond Girl and current star of Reign of Assassins, Datuk Michelle Yeoh has the pick of any global jeweller from Cartier, Chaumet, Piaget, Mauboussin, Mouwad, Harry Winston or Tiffany. Since this year, Ipoh-born Datuk Michelle Yeoh, Miss Malaysia 1983, has opted for bling from local jeweller Winnie Sin of Rafflesia and Mandalay.

Rafflesia is the last word for pearls while Mandalay, like its name suggests, is the first place connoisseurs congregate to pick the crop of Myanmar’s rubies and jade

Hong Kong-based superstar Michelle Yeoh met with Aung San Suu Kyi in Myanmar on Monday and again on Tuesday at the airport in Yangon as part of research for Yeoh's possible role in a biopic about the democracy leader.

During their meeting, Yeoh showed Suu Kyi "some production stills on her camera from the movie in which she had dressed like Aung San Suu Kyi. The two of them look very much alike and have a similar build," said Nyan Win, spokesman for Suu Kyi's National League for Democracy opposition party.

According to the Bangkok Post, the movie is titled "Dans la Lumiere" and will be directed by Luc Besson. A French production team is already wrapping up location shooting in Thailand, which will stand for Myanmar in the movie.