Larry Low charged at last but had 3 years to hide and conceal.Can money from HK be recovered? The Edge has reported:

Malaysian police today filed the first set of criminal charges against Low Taek Jho (Jho Low) and his father over money allegedly stolen from 1Malaysia Development Bhd (1MDB).
The charges for money laundering were brought against Low and his father Tan Sri (Larry) Low Hock Peng “in absentia” by the Commercial Crime Investigation Department (CCID) of the police and the Attorney-General’s Chambers.
The court papers were registered with the Sessions Court in Putrajaya this morning and warrants of arrest for both men were also sought.

This is welcome news, but the fact that Larry Low and not Jho Low ought to have been the focus of investigations was reported on Sahathevan Blog three years ago,and largely ignored, giving the Lows plenty of time to hide away "their" assets.

Overlooked in this week's reporting is this revelation ,with regards a  report lodged with Hong Kong Police by UMNO whistle-blower Khairuddin Hassan:


Four other companies are also suspect, added Khairuddin, because Najib is a signatory here and the accounts of the companies show that a total of RM1.125 billion has been kept at the Hong Kong branch of Credit Suisse. “I have requested the Hong Kong police to conduct comprehensive and detailed investigations on the financial sources of the companies concerned and their transactions.”
“I requested the authorities concerned to investigate Alliance Assets International Ltd; Cityfield Enterprises Ltd; Bartingale International Ltd; Wonder Quest Investments Ltd. All these companies have Najib as the signatory.


It has been established that the report included this document,which suggests that monies were transferred from Najib's AMislamic Bank and Singapore   accounts to accounts at Credit Suisse's branch in Hong Kong: 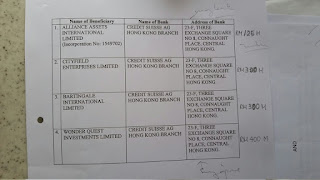 The report against Larry Low concerns the Low family's takeover of Coastal Energy , a company formerly listed on the Toronto Stock Exchange.It has been alleged that the takeover was funded in part with funds from 1 MDB.The report points the finger at Tan Sri Larry Low as the mastermind of his son Jho Low's adventures. The reports taken together suggest  a base of operations  in Hong Kong.
END
Posted 3rd September 2015 by Anonymous
Posted by Ganesh Sahathevan at 7:14 AM