AND NOW,MAYBE HOPE OF SOME ACTION: China's Foreign Minister Wang Yi, right, meets New Zealand's Acting Prime Minister Winston Peters in Beijing on May 25.    © Reuters
WELLINGTON -- New Zealand's balancing of its relationships with China, its most important trading partner, and with traditional allies Australia and the U.S. has shifted toward the latter two, after the announcement of major new defense spending and a strategic report using uncharacteristically critical language about China.
The commentary on China in the Ministry of Defense's Strategic Policy Statement released July 6 is relatively mild and also includes positive references to the country's international role in the Asia-Pacific region. But it marks a departure from Wellington's previous stance of carefully avoiding causing any offense and no longer refers to Beijing as an "important strategic partner."
The more forthright tone from New Zealand can be partly attributed to increased pressure from Australia and the U.S., analysts said.
On July 9 Defense Minister Ron Mark announced that New Zealand would buy four Boeing P-8A Poseidon submarine-hunting maritime patrol aircraft for 2.35 billion NZ dollars ($1.6 billion). One of the key reasons Mark gave for the purchase was the aircraft's ability to operate in joint missions with allies such as Australia, the U.S. and Canada.
Acting Prime Minister and Foreign Affairs Minister Winston Peters has been signaling this year that New Zealand must respond to a rapidly changing regional security landscape.
"The Asia-Pacific region is much more contested. Great power rivalries have intensified ... Overall, there is less of a consensus on what the future of this region will look like and greater concern about the strain on the international rules-based order," he said in a recent speech.
The defense policy statement said China is deeply integrated into the rules-based global order but has not consistently adopted the governance and values of the order's traditional leaders. It noted Beijing had "adopted a liberalising economy absent liberal democracy." New Zealand's Acting Prime Minister Winston Peters, center, and Defense Minister Ron Mark, left, announcing that the country has agreed to buy four Boeing maritime patrol planes from the U.S.   © AP
China's more confident assertion of its interests has raised tensions with neighboring countries and the U.S., and some of its actions challenge the existing world order.
"China has expanded its military and coastguard presence in disputed areas of maritime Asia. It has determined not to engage with an international tribunal ruling on the status of sovereignty claims," the statement said.
"Both domestically and as a basis for international engagement, China holds views on human rights and freedom of information that stand in contrast to those that prevail in New Zealand."
Peters confirmed Beijing had protested about the commentary through diplomatic channels. Chinese foreign ministry spokeswoman Hua Chunying told a Beijing press conference on Monday her government had made "stern representations with New Zealand on the wrong remarks it has made on China."
"We urge New Zealand to view the relevant issue in an objective way, correct its wrong words and deeds and contribute more to the mutual trust and cooperation between our two countries," she said in reference to comments on the Chinese militarization of contested islands in the South China Sea.
Peters defended the change in tone in the statement, telling reporters this week that New Zealand was now willing to be more candid and honest, "rather than pulling all our punches and doing nothing about things we don't agree with."
The statement comes just six weeks after Peters visited China and announced a new round of negotiations to upgrade the two countries' free trade agreement. Since The FTA was signed in 2008, China has overtaken Australia as New Zealand's largest trading partner and annual exports to China have increased sixfold to NZ$12.2 billion. 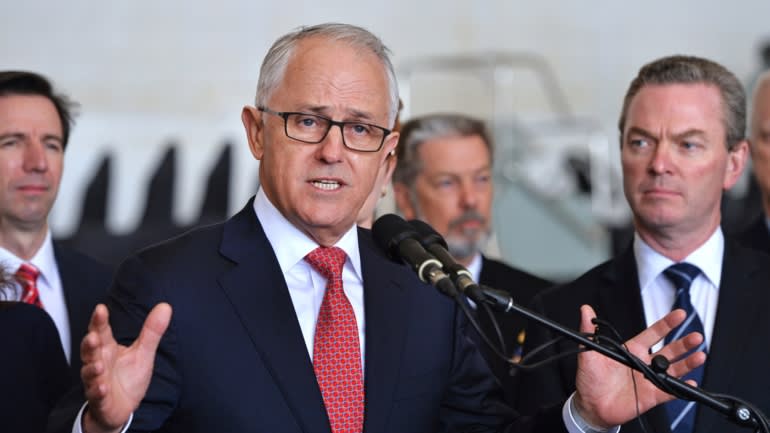 Australian Prime Minister Malcolm Turnbull's government has introduced sweeping new laws aimed at preventing interference by foreign governments.    © AP
David Capie, the director of the Centre for Strategic Studies at Wellington's Victoria University, said there was a growing perception in Washington and Canberra -- rightly or wrongly -- that New Zealand was unwilling to confront growing Chinese political influence within the country.
"To address this, the defence policy statement is a clear tilt back towards traditional partners, notwithstanding some gentle criticism of Washington's decisions about TPP and the Paris Climate Change agreement," Capie said in a commentary.
The debate over political influence within New Zealand intensified last year with revelations that Jian Yang, a legislator in New Zealand's then-ruling center-right National Party, had taught English to Chinese spies before leaving China in the 1990s and becoming a New Zealand citizen in 2004. Yang denied having spied for China and remains in Parliament.
A report last year by Canterbury University political scientist Anne-Marie Brady also claimed Beijing had taken control of nearly all New Zealand's Chinese language media and was influencing the expatriate Chinese community in New Zealand through front organizations.
Similar allegations about Chinese interference in Australian politics led this month to the passage of sweeping new laws by Prime Minister Malcolm Turnbull's government aimed at preventing interference by foreign governments. The growth in the economic relationship between New Zealand and China has also created domestic political tensions. Chinese buyers were partly blamed for the boom in Auckland housing prices, especially between 2014 and 2016, which has made housing unaffordable for many first-time buyers.
Chinese companies buying farm land and agricultural companies in recent years also became controversial, although China still accounts for only a relatively small proportion of total foreign investment in New Zealand.
The Labour Party-led coalition government, which came into power in October last year, has responded by announcing a proposed ban on housing purchases by non-resident foreigners and has also made rules for foreign investment in rural land more restrictive.
China's growing influence in the South Pacific, a region where New Zealand and Australia traditionally were the leading powers and aid donors, has come under renewed scrutiny. Without naming China, Peters has referred to growing competition and influence by non-traditional partners in the region, where Chinese-funded roads, buildings and other aid projects are an increasingly common sight.
New Zealand announced a large increase in aid to the South Pacific this year and with Australia is reportedly planning to sign a new security, aid and cooperation pact with South Pacific countries later this year.
Peters said China and New Zealand remain close but the government would in future be "upfront and speak plainly to our friends."
Posted by Ganesh Sahathevan at 4:57 PM