Johor has a water shortage;Singapore wants a water deal with Johor : Mahathir should bless the "win-win"solution 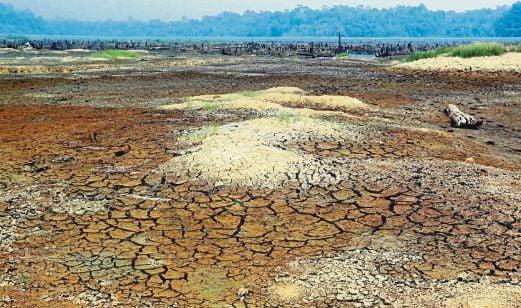 A dry Congok Dam in Mersing. Rainwater, which the dam relies on to replenish its reserves, is scarce thanks to the El Nino phenomenon. Pic by Mohd Azren Jamaludin
By HALIM SAID AND RIZALMAN HAMMIM - September 4, 2016 @ 11:28am

First, the brainwave  which seems to have been inspired
by Singapore:


The crown prince of Johor, Tunku Ismail Sultan Ibrahim, has said that water in the state belongs to the state government, and he prefers that the federal government not interfere on the issue, as it relates to the existing agreement with Singapore.
Speaking in an exclusive interview with Channel NewsAsia on Thursday (Jul 19), he stressed that water is an issue over which the state has sovereignty, and that the Johor state government should decide on a “win-win” agreement with Singapore.
“At the end of the day, the water in Johor belongs to Johor. Water is state sovereignty. When it comes to religion, land and water, it belongs to the state. Therefore, I think it's the Johor state government (that) should decide. (I prefer) not to have federal interference when it comes to water between Johor and Singapore,” said Tunku Ismail.

Meanwhile, the reality is that Johor is running out of raw water that it can supply Singapore without harming its own supplies:

A GHASTLY sight greets those who are given permission to enter the Congok Dam in Mersing, Johor. Resembling anything but a dam, all one sees is cracked, parched earth dotted with pools of water barely there.

The water level at the dam was at 2.5m and 2.6m this past week — dangerously below the critical level of 3.5m, thanks to the drought caused by the El Nino phenomenon, which has hit Mersing for the past two years.
The drought affected the output at the Tenglu water treatment plant, which relies on raw water sourced from the Congok Dam. The dam relies solely on rainwater to replenish its reserves.
As a result, 40,000 people in Mersing are putting up with a fifth month of water rationing.
This comes in the wake of a four-month water rationing exercise that caused hardship to 600,000 people in Pasir Gudang, Masai and part of Johor Baru last year.
Another 66,000 people in Tanjung Surat, Pantai Timur and parts of Kota Tinggi had also experienced water rationing around the same time due to the low water levels recorded at two dams in the state.
In Mersing, traders, businesses and households are the most affected by the latest round of rationing, as their taps run dry for two days before supply is resumed for a 24-hour period.
Unfortunately, the “back on” supply in certain areas in Mersing was reduced to six hours recently, compounding the people’s hardship.
The situation is as grave as it gets. In an exclusive interview with the New Straits Times last Tuesday, Sultan of Johor Sultan Ibrahim Sultan Iskandar said the recorded rainfall this year was half of last year’s.
The ruler urged industries to use recycled water, and for state authorities to look into adopting Singapore’s water management model.
The city-state is known for its sustainable water management, including its NEWater (treated used water).
With Johor’s water reserves being susceptible to weather patterns, and because 99 per cent of the state’s raw water are sourced from surface water, new sources are needed to cope with the lower rainfall.
The Johor Water Regulatory Body (Bakaj), which is responsible for managing the state’s water resources, said it had been working to protect water catchment areas.
Bakaj director Mohd Riduan Md Ali said it spared no effort to ensure water reservoirs and their catchment areas were protected.
He said Bakaj, along with the state government and other water-linked agencies, such as the state water utility SAJ Holdings Sdn Bhd, were in talks to find new water sources, including a proposal by the state government to tap underground water via tube wells.
“The state government will make the announcement on the likely location for the tube wells,” Riduan told the New Sunday Times.
He said Bakaj had been proactive in acting against those who disrupted Johor’s water supply system, including through agriculture or industrial activities that encroached into water catchment areas.
Under the Johor Water Enactment 1921, those found guilty of causing blockage or interference to the water supply system related to any dam can be fined up to RM500,000.
Riduan said anyone who wished to set up farms or industries near water catchment areas needed to get a licence from Bakaj.
He said Bakaj had fenced water catchment areas to prevent encroachment since last year.
“We began with the Upper Layang Dam in Masai where we partially fenced the 2,575ha water catchment area. The second phase involving 13km of fencing in the same area will begin by end of the year.”
He said fencing would first be done around critical dams in the state before it was expanded to other catchment areas.
“We have partially fenced the Sungai Pulai water catchment area and this has prevented encroachment.”
Riduan said Bakaj was moving to gazette all water catchment areas under its jurisdiction to further protect them.
“There were cases where the boundary of agriculture land breached the boundary of the water catchment areas.
“With the fencing and the creation of buffer zones between agricultural land and catchment areas, as well as regular checks, we have controlled the situation.”

Mahathir should bless this union ,between a state bound by national boundaries,and a city state which has no choice but to remind Malaysia that the water agreement is at the  " basis for Singapore's very existence as an independent sovereign state."

Posted by Ganesh Sahathevan at 5:46 AM