Is the Vincent Tan Raya photo-op getting in the way of arresting Jho Low: Interrogating Robin Tan can provide significant intel

While Malaysian authorities continue to trail Jho Low (in every sense of the word) obvious targets of any proper investigation are being ignored. Case in point: Robin Tan, who if properly interrogated, is likely to provide significant intelligence that can lead to the arrest of Who Low, his accomplices
,and to all the assets purchased with stolen 1MDB money.

Najib & Rosmah conducted 1MDB business on their own :Why not seize the assets of Low Hock Peng,Vincent  Tan ,and Bustari Yusof who were also present ?

The IPIC "settlement" seems shaky,and the China "rescue" seems to have fallen apart.

A realistic avenue for the recovery of Malaysian taxpayers' money lost in the 1MDB debacle is needed, and while the US DOJ has an action to do so in play, Malaysians really ought to be helping themselves.

One possible solution may be the seizure of all and any assets held by Low Hock Peng (head of the Low Family,and father of Jho) ,Vincent Tan( head of the Berjaya Group of companies,  father of Robin  Tan) and Datuk Bustari Yusof of Sarawak.

As reported previously on this blog and by Sarawak Report, PM Najib and wife Rosmah illegally conducted 1MDB business with PetroSaudi on their own.It was also reported that those present during those dealings included  Jho Low, Robin Tan,and Bustari Yusof. Arguing that Jho and Robin's presence had nothing to do with their families' business interests would be akin to splitting what  hairs one might find on  Arul Kanda's head, which seems to be in danger of being axed.

It is more likely than not that all three were parties to the business that was conducted,despite not having anything to do with 1MDB.
It follows then that the assets of all three, who represent their families, could be seized as a means of recovering what has been lost from 1MDB.

There are likely to be a number of legal means that might be relied on for the purpose, but Vincent Tan and family,  and Bustari Yusof both are recipients of very lucrative government concessions that may be withdrawn at any time. These could be seized, placed in some form of public trust, and the proceeds used to recoup the 1MDB losses.
As with regards Larry Low Hock Peng and family, is it not time to drop the pretence that they are  "old money" philanthropists? The same may be said of PM Najib, whose own brothers rejected his claim of "legacy family assets".

Photos show Najib, Rosmah , conducted 1MDB business with PetroSaudi on their own, without 1MDB management, or board present 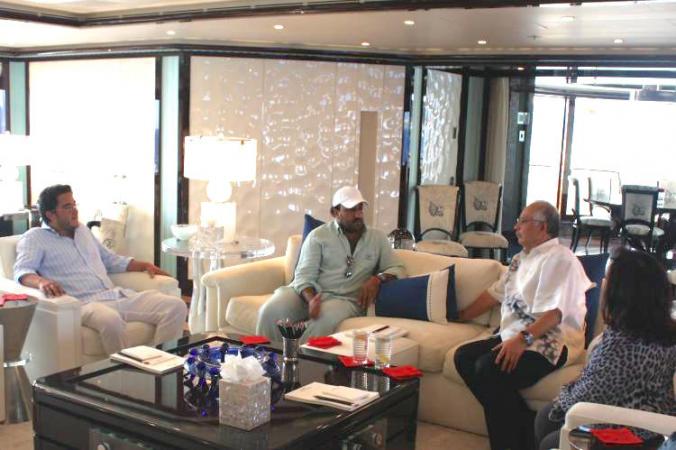 The photo above obtained by Sarawak Report shows PM Najib, wife Rosmah and Petrosaudi's Prince Turki Abdullah and Tarek Obeid in discussion, on board a yacht somewhere off the coast of the south of France.


Clearly visible in the photo are three sets of documents,which appear to be some form of prospectus (using that term in its broadest sense). Interestingly, Rosmah Mansor has her own copy. Obviously, this was no friendly holiday chat over drinks while taking in the sea breeze; detailed business matters were being discussed.

In its own words, PetroSaudi's business dealings in Malaysia have been with 1MDB,and hence it is hard to see that the above discussion did not concern 1MDB.

The implications for Najib are obvious. To begin with the photo belies the(in any case idiotic) claim made by his  lawyer that his  "signature on 1MDB documents (is)a formality, doesn’t mean he decides or knows all." Consequently this photo adds to the existing evidence that puts him at the very centre of the 1MDB theft.

Then , the apparent involvement of Rosmah in 1MDB's affairs does seem to confirm the allegations regarding  her, and her son Riza's dealings in 1MDB's cash assets.It is hard to see how Najib , or Rosmah can justify her being involved in discussions concerning 1MDB.
END

Last week in California the Prime Minister’s step-son, Riza Aziz, filed a notice to
dismiss the US Department of Justice’s seizure of his properties on the grounds that
he was the “innocent owner” and could not be held responsible for the fact the money was stolen from 1MDB.

Motion to dismiss by Riza’s lawyers
Those properties include a Beverly Hills mansion, the film production company Red Granite’s future earnings from Wolf of Wall Street, a London Belgravia town house and a New York penthouse.
What this defence contends is that Riza had simply no idea that the hundreds of millions that suddenly started coming his way was not stolen, but thought it was a gift. For this reason he reckons he should be allowed to hang on to all the items bought with Malaysia’s stolen development money (money which the Malaysian tax payer is now faced with paying back to the original lenders at high interest rates).
Yet Sarawak Report has established new evidence that Riza was in from the very start on the 1MDB heist, in that he was invited to attend the meeting where the first ‘joint venture’ was cooked up between Jho Low, the Prime Minister and company PetroSaudi on the super-yacht Tatoosh in August 2009.
A trip manifest reveals that the jaunt, which took place between 15-20th August, was organised by a “high-end boutique concierge company” named Baroque, of which Jho Low was a member. According to the note made by the representative for Baroque, Sahle Ghebreyesus, the trip was in fact commissioned by his client Jho Low (whom he describes on the manifest as “my guy”). In March the following year Tarek Obaid also joined Baroque, which is an agency designed to pamper the super-rich:

High-end boutique concierge company that organised the rental of Tatoosh
Photographs later obtained by Sarawak Report show the main players behind the theft of the first billion from 1MDB through the PetroSaudi ‘joint venture’, which was strategised during this super-yacht meeting.
However, we can now confirm that Riza Aziz also joined the party, along with Najib’s key financial cronies Bustari Yusof and Robin Tan.  Robin Tan is the son of Vincent Tan, long associated with BN political funding, and Bustari is the Sarawak PPB party treasurer cum billionaire, who was handed the ‘turnkey contract’ for the Pan Borneo Highway project and whose brother Fadillah has now been appointed Minister for Public Works.
This gives the Bustari brothers control over all the big contracts handed out by the Government, in Malaysia’s notoriously corrupted procurement process and Bustari has rarely strayed from Najib’s side in recent months.

‘My guy” Jho Low fixed the trip. “innocent owner” Riza Aziz was also on board
Did Riza have simply no idea what was going on as these guys did the business which was soon to send money streaming his way?
It was just a few short months later that he went on to launch his production company Red Granite Pictures at the most lavish launch party ever seen at the Cannes Film Festival in 2010.
And over the next two years Jho Low was at Riza’s side at every major film event involving Red Granite Pictures, including Wolf of Wall Street, which was funded by yet more money stolen from 1MDB, thanks to the later ‘Power Purchase Loan’ manoeuvres also organised by Jho Low.
According to the New York Times, Low was furthermore directly involved in the purchase of both of Riza’s US properties in Hollywood and New York. Did Riza simply fail to realise what was going on?
There can only be two conclusions. Either Riza is lying and he did know or Riza is a sad and stupid creature, who was merely used as a front and proxy by the players behind the scandal, which included his friend Jho Low and step-dad Najib.
He is therefore EITHER innocent OR the owner.  He cannot be the “innocent owner”!

left to right – Tarek Obaid, Prince Turki and Najib Razak – the three named Shareholders of the 1MDB PetroSaudi Joint Venture meeting a month before the deal on the yacht Tatoosh.
Sarawak Report requests that various journalists, authors and film
makers, who seek to use this site as their resource for commercial
projects such as books and documentaries give full credit to this blog, acknowledge copyright and do not seek to apply for awards,
commissions etc without so doing.
Posted by Unknown at 1:10 AM
Posted 4 weeks ago by Anonymous
Posted by Ganesh Sahathevan at 6:14 PM