Dr M warns hasty bid to charge Najib may see him go free-Yes but why have Azman Hashim and AMBank not been raided,assets and documents secured?

It is obvious that  hastty bid to charge Najib may see him go free,but why is there no action at Ground Zero, AmBank? That Ambank is Ground Zero for the 1MDB theft is clear to see from the above transaction. Mahathir and government must not be seen to be taking the Australian path of protecting the main players.


Why has the executive chairman Azman Hashim not  being questioned? Why has AMBank not been raided, and all relevant documents secured? 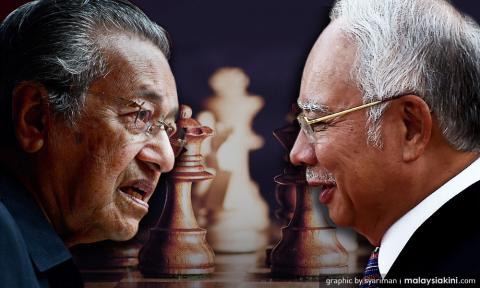 10 Jun 2018, 10:14 pm (Updated 10 Jun 2018, 10:23 pm)
Prime Minister Dr Mahathir Mohamad has warned that a hasty attempt to charge his predecessor Najib Abdul Razak over the 1MDB scandal may see him go free.
"Loads of people are awaiting - when are we going to arrest Najib. But it is not so easy, we need to collect the kind of evidence that will stand up in court.
"If we fail to do that, he might win. Just think what would happen if he wins a trial and is found not guilty.

"Then all the promises we made, all the bad things we said about him would be questioned by the people who voted us in," he told a dinner event with the Malaysian diaspora in Japan tonight.
Mahathir said the government wanted to ensure there was strong evidence to secure a guilty verdict.
"We hope we will be able to gather enough evidence to charge him in court and hopefully he will be found guilty.
"We don't know because unlike the previous government, we don't have any influence over the courts.
"We have decided we will be truly democratic in the sense that the people's choice must be respected, we must understand democratic rules and procedures and we must not take power in our hands," he said.
Mahathir, who previously served as prime minister from 1981 to 2003 and was then accused of being an authoritarian leader, said his new government will ensure there is no concentration of power.
"Power in the country must be divided between the legislative, executive and judiciary.
"This kind of check and balance can make sure that none of us does the wrong things so that it will not be easy for us to ride roughshod over the country and just throw people into jail.

"So, I think that would be a relieve to Najib," he said.
Mahathir, in his speech, also defended the government's decision to impose a travel ban on Najib.
"Loads of people nowadays disappear. Even 'Jamal Tongkol' has disappeared," he said in reference to Sungai Besar Umno chief Jamal Md Yunos who is wanted by police but had reportedly fled to Indonesia.
"We don't know who else is going to disappear but we hope before they can disappear, we can go through the law of the country and punish the people who broke the law," he said.
Posted by Ganesh Sahathevan at 7:40 PM