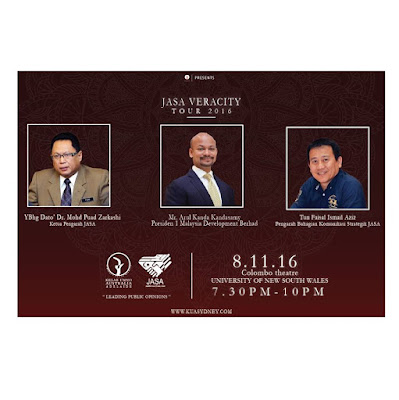 "The directors of 1MDB confirmed that 1MDB was insolvent and unable to repay its debts," Finance Minister Lim Guan Eng told reporters on Wednesday (May 23) after the meeting.
"The former CFO (chief finance officer) Azmi Tahir had also written to the ministry in March to state that 1MDB will not be able to service its interest due in April and May 2018."

Which confirms the general  conclusions in this previous article:


While IPIC and 1MDB have made various statements which give the impression that the Malaysian Government and 1MDB have  collectively settled all debts to IPIC,  their own words suggest the opposite and confirm the following:


"This arbitration settlement has weakened the US DOJ civil suit and claims that 1MDB's funds were stolen," said Umno supreme council member Mohd Puad Zakarshi in a statement today.Mohd Puad is also the director-general of the Information Ministry's Special Affairs Division (Jasa).


WHOEVER PAID THE BILL FOR 1MDB HAS JOINED IPIC IN A SHAM TRANSACTION, WHERE MILLIONS HAVE BEEN PAID FOR WORTHLESS UNITS

Under the settlement (with IPIC), 1MDB will make certain payments to IPIC .... 1MDB said obligations will be met primarily via monetisation of 1MDB-owned investment fund units

The DOJ's assessment of the value of the units:
"relatively worthless"

AND ,THE MATTER HAS NOT ENDED.MALAYSIA RESUMES RESPONSIBILITY FOR THE PAYMENT OF A DEBT WHICH BACKS NO ASSET

Problems began when the Abu Dhabi fund denied it owned Aabar Investments PJS Ltd, a British Virgin Islands company which received payments of $3.5 billion from 1MDB meant for the IPIC.

1 MDB's US$ 2.3 billion "Cayman units" ,worthless, if not non-existent :Evidence from Singapore's DPP

This is contrary to what 1 MDB and Arul Kanda had to say about the Brazen Sky investments, that is, that Brazen Sky owned units in segregated portfolio company that was managed by some party external to 1 MDB. This story was only changed recently, when in a written reply to MP Tony Pua the Malaysian Ministry Of Finance said (as it turns, admitted) that there was no external manager.
Consequently the entire series of transactions 1 MDB says were financed out of those units is in doubt, and 1 MDB's  current debts revalued upward accordingly.The existence of the units and any money that goes with it can be assumed to be a myth.
END


1MDB's Reply to Sarawak Report Allegations
1MDB has been made aware of an article, dated 10 October 2015, that has been published in the Sarawak Report, an online blog currently banned in Malaysia. This article has published selectively extracted materials and contains serious and unfounded allegations, in a clear attempt to manipulate readers with respect to events that have previously taken place at 1MDB.
1. 1MDB-Petrosaudi
The fund units, owned by 1MDB subsidiary Brazen Sky Limited, were originally valued at US$2.318 billion in September 2012, as the eventual outcome of various equity and murabaha loan investments totalling US$1.83 billion by 1MDB with PetroSaudi between 2009 and 2011. Over the investment horizon, 1MDB has received and reflected in its audited financial statements, cash returns, i.e. approximately US$81 million murabaha profit, and approximately US$263 million dividends from fund unit investments, i.e. a total cash return of approximately US$346 million and a total gain over time of US$488 million (US$2.318 billion less US$1.83 billion).
2. Fund Unit Redemptions
As of 31 March 2014, the fund units were valued at US$2.33 billion.  On 5 November 2014, at the time 1MDB's financial statements for the year ended 31 March 2014 were published,  an amount of approximately US$1.22 billion had been redeemed, in cash, with proceeds being substantially utilised for debt interest payment, working capital and payments to Aabar as refundable deposits for options termination.
A sum of approximately US$1.11 billion in fund units remained, which together with a dividend of approximately US$130 million, equates to the remainder sum of US$1.23 billion described in the notes to 1MDB's accounts.
On 14 and 24 November 2014, approximately US$170 million of the US$1.11 billion fund units were redeemed, in cash, leaving a balance of approximately US$940 million in fund units. On 2 January 2015, i.e. prior to Arul Kanda joining 1MDB, a final redemption of approximately US$940 million was undertaken through a sale of fund units to Aabar, with cash payment being deferred. (Note: Aabar was separately a guarantor of the fund in which the units were invested but by mutual agreement, the redemption was via sale of fund units instead of calling on the guarantee. This fund unit sale agreement was subsequently superceded via the Binding Term Sheet signed between 1MDB and IPIC, the "AA" rated parent of Aabar, on 27 May 2015, upon which a payment of US$1 billion was made by IPIC to 1MDB.)
3. 1MDB President and Group Executive Director Arul Kanda's comment
Whilst Sarawak Report has published a number of alleged 1MDB related documents in the past, which we now know to be stolen and possibly doctored goods, sourced from a convicted criminal, I can confirm that – in this particular case – it appears to have published an authentic 1MDB document, namely minutes of a 12 January 2015 Board meeting. This was the first 1MDB Board meeting I attended, i.e. a week after I joined the company on 5 January 2015.
At the meeting, I stated to the Board, based on my understanding of events that occurred before my time, that the redemption of fund units happened in cash for an amount of US$940 million. However, upon further investigation and verification, it became clear that this was a misunderstanding, which I then clarified to the Board and our shareholder, the Ministry of Finance. This clarification is clearly recorded in subsequent Board minutes and can be verified.
On 13 January 2015, I confirmed via a press statement that the remaining amount of US$1.11 billion had been redeemed, in full. What was unfortunately not made clear, was that the redemptions happened partly in cash and partly through the sale of fund units, with cash payment being deferred. It is this important distinction which caused a misinterpretation of my statement, first during a Business Times interview on 9 February 2015 and subsequently by the Ministry of Finance, in a Parliamentary answer on 12 March 2015.
I have explained in detail the sequence of events to the National Audit Department and to 1MDB's auditors, Deloitte, as part of their thorough and professional review of 1MDB's past transactions. In addition, I have openly and publicly taken full responsibility in June 2015 for the misunderstanding on this matter – i.e. the buck stops with me.
In my capacity as President, I answer to the Board and the shareholder of 1MDB. My strong track record speaks for itself and my only professional agenda is to fix the challenges in 1MDB. There is no need for me to lie or cover-up what has happened in the past, as has been alleged by those who make sensationalist claims to drive their own political agenda. Accordingly, I look forward to being questioned in detail on this matter at the upcoming Public Accounts Committee hearings and for my answers to be a part of the public record, to conclusively put this matter to rest.
Posted 29th April 2016 by Anonymous

In explaining the nature of the so-called 1 MDB units worth USD 1.103 billion  that were once thought to be in  cash Second Finance Minister Datuk Seri Ahmad Husni Hanadzlah said:


“There’s a mistake… mistake in the sense that, the impression (given by 1MDB) when they said they have redeemed (the funds) and saved (them) in the Singapore bank (Singapore BSI).... so the impression is that there’s cash, (but) actually that is a saving,” Ahmad Husni said told reporters at the Dewan Rakyat today. “That (the redemption) is (in) unit... that’s what it is… in unit, and then, that is being backed sovereign wealth funds” .

The US$1.103 billion is said to be  the part of a total of US$ 2.32 billion which has come  to be known as the Brazen Sky Cayman Island units, Brazen Sky being  a wholly-owned subsidiary of 1 MDB incorporated in the Cayman Islands.

When 1MDB and its CEO Azrul Iskandar aka Arul Kanda attempted to explain how and where  1MDB had invested some RM 42 billion in borrowing that sum total was broken down into a deposit with Aaabar Investments PJS ,a subsidiary of the International Petroleum Investment Corp of Abu Dhabi,and investment "units" held by Brazen Sky(see last item below).

However,  The Wall Street Journal has now reported, in a story about  the Aabar deposit:


According to 1MDB’s financial statements, the Malaysian fund made a collateral payment(the deposit)  of $1.4 billion (to secure the guarantee) . A draft report into 1MDB’s activities by Malaysia’s auditor general, reviewed by The Wall Street Journal, said the payment went to a subsidiary of IPIC called Aabar Investments PJS.

According to the Malaysia auditor general’s draft report, 1MDB fired KPMG LLP as its auditor in late 2013 after the firm declined to sign off on 1MDB’s accounts unless it received more details about $2.32 billion the fund said was invested in a Cayman Islands account.

Aabar stepped in and guaranteed the Cayman Islands funds, an official for Deloitte, which took over as 1MDB’s auditor, told a closed-door meeting of the parliamentary committee probing 1MDB, according to a transcript of the proceedings reviewed by the Journal. This guarantee was never made public.

Given the above  report by the WSJ, there are now two issues that make that guarantee worthless.First, even if it existed as WSJ said it did, IPIC is not acknowledging it.This is evident from IPIC's  statement to the London Stock Exchange tilted 1 MDB Debt Settlement Arrangements  which makes no reference at all to any guarantee other than that for  two USD 1.75 billion loan packages,which had crystallized.
And now with  IPIC and Aabar disputing  even having received the USD 1.4 billion which secured their guarantee, the guarantee can be considered as good as gone, even if it existed.