And then yesterday in Sydney:

\
And , at  roughly the same time in Switzerland ,as reported by Sarawak Report: 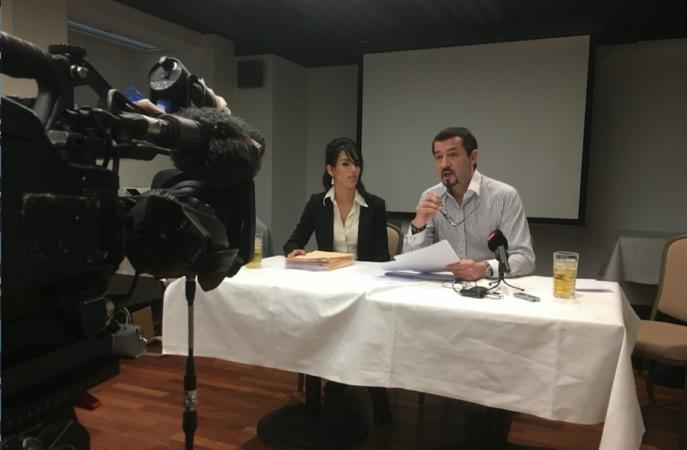 Justo places a dossier of evidence before reporters
There was an afternoon of drama in Zurich this weekend when, following months of silence, the 1MDB whistleblower Xavier Justo stepped forward with his wife Laura to lay out their charges against those whom they claim conspired to entrap and imprison him in Thailand.
In a central location in the capital they told a selected group of journalists the details of an astonishing plot to entrap and imprison him in Thailand, all in order to discredit the exposes over 1MDB
The couple had waited patiently before speaking out, they explained, in response to requests from the Swiss authorities to first pursue official investigations into the massive money laundering scandal and to make their preparations.
However, in a letter sent to their lawyer on 9th March, the Federal Prosecutor Alice de Chambrier, confirmed that a full investigation has now been officially launched into all thirteen of the couple’s criminal complaints made against three named individuals, Tarek Obaid, Patrick Mahony and Paul Finnigan.  It means that these three and their alleged accomplices can be arrested and interrogated by Swiss law enforcers, much in the same way that they orchestrated for Justo to be arrested in Bangkok. Justo reminisced to reporters about his experience of his arrest, followed by his parading in Bangkok before Malaysian media. Justo said he was taken completely by surprise and that the whole episode was “a show” to convince Malaysians and discredit Sarawak Report over 1MDB.
The list of thirteen charges laid against the three named individuals and by implication their collaborators, which include the Prime Minister of Malaysia referred to in the complaint, is jaw dropping.  Moreover, it reflects everything that Sarawak Report has reported about the conspiracy to entrap Xavier Justo and get him imprisoned in Thailand, in order to attempt to discredit our exposure of the billion dollar 1MDB thefts.
After months of preparation, the Swiss federal prosecutors have now confirmed that they have adopted every single one of the charges that were originally levied by Justo, which means official law enforcers believe there are sufficient grounds to pursue accusations of:

These charges are levied specifically against the Swiss based Saudi, Tarek Obaid and two British citizens, Patrick Mahony and Paul Finnigan.  However, the charge sheet cites they refer as well “against any other named persons whose acts may be criminalised, in particular because of the ..offences”.
According to the statements made by Xavier Justo at his press conference today, those accomplices include the Swiss lawyer, hired by PetroSaudi to falsely misrepresent his case, Marc Henzelin, as well as several PR and ‘private investigators’ who assisted the PetroSaudi directors. New accomplice revealed in the multi-million dollar disinformation campaign?
In particular Justo named a Swiss PR man named David Scholberg, who describes himself as CEO & Founder of KBSD Reputation & Cyber-Security, who he claims acted as an intermediary who paid lawyer Marc Henzelin CHF300,000 on PetroSaudi’s behalf in order to hide the connection.
Others named were another Swiss PR operator, Marc Comina, as well as the British company Protection Group International and its CEO Brian Lord.  Lord was also flown to Thailand during the period of the arrest and made statements to the press claiming that his ‘cyber intelligence’ company had proof that Sarawak Report had ‘tampered’ with data provided by Justo from PetroSaudi’s database.
In fact, Justo revealed, it was PGI that presented false evidence to the Swiss authorities, claiming there was evidence of collusion between himself and Sarawak Report as long ago as 2011, three years before he had even heard of the blog.  The Justos have now obtained supposed emails between Justo and Sarawak Report, which PGI claimed it had retrieved off discarded computer files. However, Justo says he can prove these are forged (a claim corroborated by the Editor of Sarawak Report, who had no idea of Justo’s existence before June 2014).

Lawyer Who Was Conflicted Against His Alleged Client

Likewise, Justo has produced documents and emails which show that although the Swiss high profile lawyer Marc Henzelin, claimed to be representing him in Switzerland and had publicly denied that he was engaged by PetroSaudi, the lawyer was in fact knowingly being paid by that company through Scholberg to ‘represent’ Justo against his own interests in the criminal proceedings, which had been initiated against him by PetroSaudi.
Also named and heavily implicated during this press conference and in the narrative and evidence supporting the charges was the Malaysian Prime Minister, quoted by Mahony as being the man behind their actions – the man who needed to be got off the hook.

Although followers of Sarawak Report and the 1MDB saga will already know much about the circumstances of Justo’s arrest, forced confession and imprisonment, the couple presented a swathe of new information and documentation at their press conference today.  Attending were some of the Swiss journalists whom Justo says he was forced to misinform when they came to question him in jail back in 2015. Journalists, some of whom had been misled by the plot, listened to Justo’s true story as a free man
In return for a promise to set him free Justo told those journalists that he was blackmailed into incriminating himself and giving them false information.
Swiss PR man, Marc Comina, was flown to Bangkok to train him in the answers he must give before journalists were allowed to visit him in jail, including that the PetroSaudi 1MDB data had been tampered with.
Justo also says the journalists were also supplied with misleading ‘whatsapp’ conversations, consisting of print-outs of messages which were doctored to support PetroSaudi’s own claims that it was Sarawak Report that had tampered with evidence. Telling all – the justos went before the cameras
Comina had also arranged for the interview by PetroSaudi paid lawyer Marc Henzlin with the Le Temps newspaper, where Henzelin blamed Sarawak Report editor Clare Rewcastle Brown for plotting and telling lies over the data provided by Justo.
Justo was portrayed by Henzlin as a victim, not of PetroSaudi but of Clare Rewcastle Brown, portrayed as a plotter paid by the opposition.  Today, Le Temps issued a new article explaining the deception outlined by Justo.
Producing evidence from their case for the astonished journalists, the Justos revealed emails that showed how Henzelin and Scholberg had been engaged and briefed on the plot well in advance of his arrest in Thailand.
In one email, passed on from Mahony to Scholberg and then Scholberg to Henzelin, in advance of Henzelin approaching Justo to be his legal advisor, the PetroSaudi director explained to the Swiss team that their prime job was to drum up PR support to promote their version of events in the newspapars (against Justo’s obvious interests):

“Unfortunately, a story about corruption is a better story than a mad former Prime Minister’s sister-in-law committing crimes to overthrow a democratically elected government, however this is the true story”

claimed Mahony in the forwarded briefing note.  He added “(Whatever you give them [PR targets], please make sure my name is not on it)…. you should mention confidentially that there will be arrests in Singapore and the UK, so serious jurisdictions.”
Laura complained that even before she was approached by her own so-called lawyer, Henzelin had been briefed by PetroSaudi on the supposed crimes committed by Justo and Sarawak Report.

Web of relationships that were mainly hidden from the end information receiver, say the Justos
The most pernicious aspect of the plot, as told by Justo, was the deceit that he was being assisted by a ‘Scotland Yard Detective’, sent out by the UK to investigat 1MDB.  He had been brought into a room and introduced by the Thai Police to a former British policeman named Paul Finnigan, who was in fact retired and had nothing to do with the case.
Unknown to Justo, Finnigan was working with a UK company named Spy Games, run by a former SAS soldier called Dave Thomas, who had for years ‘run errands’ for Tarek Obaid.
Finnigan and Mahony explained to Justo that if he gave a confession that discredited Sarawak Report’s exposes of 1MDB then he would be released from prison. Otherwise, Mahony told Justo, PetroSaudi had the money and influence to keep him in jail for 9 years.  It was Finnigan who spent days on end dictating a ‘confession’ to Justo in perfect English and with all the correct legal terminology, which Justo told journalists he would never have been able to write on his own.
All this was done without a lawyer and Justor was forced by Finnigan to state on each page of the 11 page confession that he did not want a lawyer present.

In His Own Words

Xavier Justo provided a written testimony to the selected journalists at the press conference, laying out his experiences in his own first personal account of what happened to him in Thailand (see below).
The account makes clear that the specific purpose of his imprisonment was to blackmail him and his wife Laura into cooperating in the discrediting of the information provided by the PetroSaudi data on 1MDB and to discredit Sarawak Report.  In one text sent by Patrick Mahony to Laura Justo he wrote “She [Clare Rewcastle Brown] is the source of all our problems. She must be discredited“.
Disowning his earlier forced statements that he had been motivated only by greed, Justo said that he had attempted to receive some money only as retribution for what PetroSaudi’s directors had reneged upon in his severance deal. He has proof of the agreement to pay him CHF6.5 million he says, the reason being that far from being a lowly IT operative, he was in fact the number three director in the company and had supported its ventures for several years:

“I didn’t realise at the time that it [the 1MDB deal] as so big. They stole billions that should be for education, hospital and so forth, not yachts, prostitutes, parties and so on”, he said:

Speaking to the reporters Laura Justo told them that she too had been held captive by the blackmailers from PetroSaudi and forced to do what they wanted in return for favours and threats to keep her husband in jail if she failed to cooperate.

Pictures of his baby. We had to beg PetroSaudi to give them to him.

“Putting someone in jail to cover your money laundering and take complete advantage of a helpless man that was your friend is devilish and miserable, but to threaten a woman alone with her baby and play with her for 18 months.  I don’t think you can be more sick than that and it tells you what kind of men they are. For example, they forced me to put an app on my phone to record Clare Rewcastle Brown to destroy her, by making a fake video distorting her words.  Luckily they forgot they had given me the app and I later used it to record their own words to me, including their threats and bribes to make me cooperate in all their schemes.”

Also attending the press conference was their fellow Swiss citizen Pascal Najadi, whose father, the former Chairmand of AmBank was shot dead in KL, he believes because he tried to reveal secrets of Najib’s billion dollar bank account at the bank. Pacal Najadi also presented his situation to the Swiss media, complaining that the Malaysian authorities have refused to investigate the motives behind his father’s murder
The Justos have revealed that they are writing a book together about their story.  Meanwhile, the wheels of justice have started turning in Switzerland and the Justos look set to keep talking about 1MDB.

Posted by Ganesh Sahathevan at 1:51 AM