Thailand, Indonesia can seek damages from DFAT for sex abuse of their children: The matter of DFAT's "ped division" ignored by Peter McClellan's RCI despite public call for investigation


"I formed the opinion that Foreign Affairs was involved in a huge cover-up of (pedophilia by its officers in SEA) and I just don't know why."

The quote above attributed to Australian journalist Derek Francis, who worked in Phnom Penh in the 90s was published in The Sun Herald on 28 April 1996.There were other allegations published in the mid 90s but these were not investigated.

As The Australian's Nalalie O'Brien put it in her 2004 article :

ALLEGATIONS of pedophilia made against diplomats seven years ago were never properly investigated, according to the whistleblowers who gave information to the Australian Federal Police.

Former foreign affairs officer Alastair Gaisford said police did not investigate all the allegations he made in 1996, and at least three of the diplomats he named now held senior positions with the department.

A police spokeswoman said yesterday that an investigation was opened that year regarding the sexual exploitation of children. She said police were currently investigating a number of people and would not comment further.

A spokesman for the Department of Foreign Affairs said yesterday there had been no new allegations of pedophilia made since 1996.

A departmental inquiry was set up after former Victorian Liberal MP Ken Aldred made claims in federal parliament about pedophilia in the department.

The inquiry, Management Response to Allegations of Pedophile Activity within the Foreign Affairs Portfolio, headed up by Pamela O'Neil, was not required to investigate the veracity of claims of pedophile activity among officials.

In December 2014 The Sunday Telegraph reported :


A FORMER Jakarta-based diplomat has urged the government's royal commission into child sexual assaults to include an investigation into the Department of Foreign Affairs and Trade, claiming it was involved in &quot;paedophile cover-ups&quot; 30 years ago.
"The South-East Asia division was then known as the 'ped division'," Shane Carroll, 62, who spent 23 years with DFAT, said.

It would be naive in the extreme for  DFAT to assume that the governments of Thailand, Indonesia, Cambodia and other countries in South East Asia are not aware of the cases of pedophilia  in their countries which involve DFAT employees, especially when the matter has been so widely reported.
It is not unlikely that those government would (if they have not done so already) pursue DFAT and the Australian Government for damages, for the harm done to their children. They are likely to do what Peter McClellan's RCI into child sex abuse has refused to do.
END


This is an excerpt from Molly Carson's "More Cloak Than Dagger: One Woman's Career in Secret Intelligence" 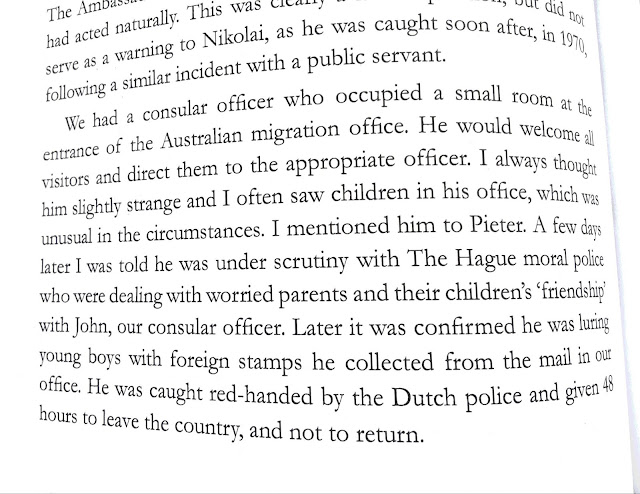 (Source Molly Carson's "More Cloak Than Dagger: One Woman's Career in Secret Intelligence" page 122)
The incident would have occurred sometime between 1955 and 1962. Government departments ,including the Department Of Foreign Affairs ,are institutions ,even if Peter McClellan's Royal Commission Into Institutional Responses To Child Sex Abuse  gives the impression that the Catholic Church is the only institution that matters.As mentioned in my earlier article , child abuse like any other activity ,requires resources to fund it,and government institutions like the Department Of Foreign Affairs provides a very good source of resources for sexual escapades, especially when the activities are better conducted offshore ,for example in Thailand, the Philippines, Vietnam or Sri Lanka, to name a few of the more  obvious destinations.
Ms Carson's book was published in 2016, and it received a lot of publicity, It is hard to see how that detail above escaped Peter McClellan's RCI.
END

Posted by Ganesh Sahathevan at 1:58 AM