Penny Wong took steps to CONFIRM Malaysian citizenship by applying for a Malaysian National Identity card,which has been retained by the Malaysian Government

The possession of a NRIC makes her declaration of being "possibly Malaysian" misleading at the very least for the NRIC ,unlike the Birth Certificate is not automatically issued, but has to be applied for. The application has to be made in person, and is a ritual that Malaysian children undergo when they turn 12. A Malaysian child who has reached the age of 12 must register for the identity card.

The reference to Wong's NRIC is in the Malay words " No Kad  Pengenalan". Paragraph 2 shows that the NRIC has been retained by the Malaysian Government. 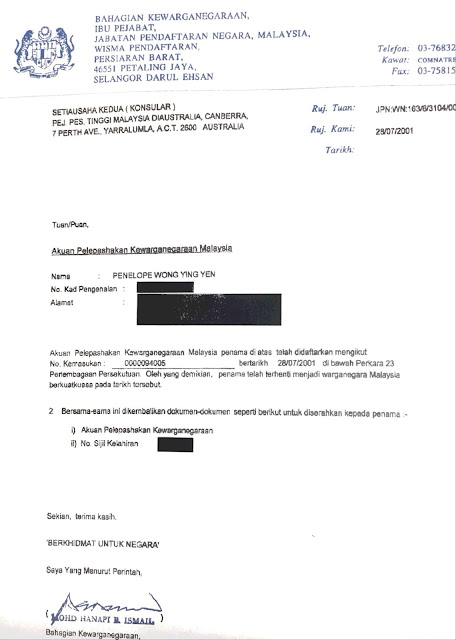 So may think that all that does not matter, given this letter which apparently conforms Wong is no longer a Malaysian citizen. However as previously reported ,this document would normally be considered a highly confidential government document ,which would not be made available to anyone outside of Government.

Given the  Barnaby Joyce decision, Senator Penny Wong is at the mercy of the Malaysian Government Posted by Ganesh Sahathevan at 6:49 PM