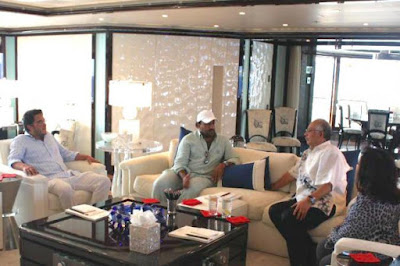 Najib, Rosmah ,conducted 1MDB business with
PetroSaudi on their own without 1MDB management,
or board present

CNN reported in June this year:
......... the Justice Department claimed that tens of millions of dollars were diverted from a Malaysian government investment fund to produce "Dumb and Dumber To" and "Daddy's Home."
It's part of what prosecutors say was an enormous international fraud: Corrupt officials and financiers stole $4.5 billion from 1Malaysia Development Berhad (1MDB) between 2009 and 2015, laundering the money through a series of shell companies with bank accounts in the United States and abroad.
Red Granite has denied knowingly accepting illicit money. The studio said it was cooperating with the Justice Department and "remains an active production company, moving ahead to complete post production work on its next feature film."

The DOJ's asset seizure process is against the  asset, in this case the rights to all income from "Dumb and Dumber To" and "Daddy's Home."  the defendant .Any party interested in the asset can then challenge the DOJ in court. The reported settlement (see below) with regards the rights to  both movies suggests that  Red Granite has dropped its argument that it was an innocent recipient of a gift that was used to finance these movies,and it was therefore the rightful owner of the rights to income of both movies.
It also suggests that Red Granite and Riza Aziz have given up the defence that Malaysia's Attorney General Apandi has found no theft and no wrongdoing with regards 1MDB ,and PM Najib,despite the facts contained in the DOJ's complaints.
END

Red Granite Settles With U.S. Government Over 2 Films As Part Of 1MDB Case

Red Granite Pictures, the Hollywood financier and producer of Oscar-nominated The Wolf of Wall Street and other movies, has reached a settlement with the U.S. government for a portion of a wide-ranging federal investigation involving a fund known as 1 Malaysia Development Berhad, or 1MDB.
RELATED

Deadline was the first to report that Red Granite and its co-founder and CEO Raza Aziz were being investigated by the feds and that the company’s assets included the films Daddy’s Home and Dumb and Dumber To could be seized. This settlement (read it here), if approved, would resolve the rights and interest to those two movies.

The court document, filed today by Red Granite reps Boies Schiller Flexner in U.S. District Court for the Central District Of California said in part: “The contemplated settlement … will fully resolve the actions assigned case numbers 16-cv-5362-DSF (PLAx) and 17-cv-04439-DSF (PLAx), and any other potential claims involving Red Granite or any of its assets, and will continue to hold harmless any third parties that do business with Red Granite.”

It’s unclear what other forfeitures may be in play in the case, but in June, the DOJ outlined why it should be able to seize all rights to those Red Granite films as well as real estate, jewelry, a jet, artwork of Van Gogh, Monet, Picasso, Basquiat and Diane Arbus, and movie posters including an original of Fritz Lang’s Metropolis valued at $1.3 million.

“We are glad to finally put this matter behind us and look forward to refocusing all of our attention back on our film business,” Red Granite said in a statement later today.

The broader case seemingly remains ongoing against Aziz, who is the stepson of the Malaysian Prime Minister Najib Razak. Razak turned 1MDB into a state-run entity in 2009, ostensibly to help the economic well-being of Malaysia. But the DOJ says funds to the tune of more than $3 billion were “stolen” from 1MD. The DOJ has alleged a vast scheme carried out by co-conspirators to enrich themselves.
Posted by Ganesh Sahathevan at 7:05 PM