Najib-Trump meeting: Trump may see Najib as an ally against ISIS,but US ally The Philippines does not agree 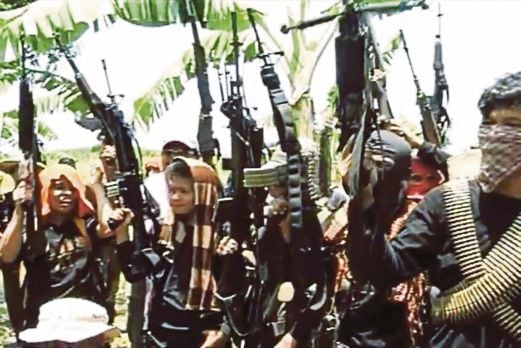 Confirmed by the MNLF's Nur Misuari,who holds the Malaysian Government
responsible for the fact:There are MNLF commanders who assist Abu Sayyaf
members by providing manpower, firearms and bullets, getting a share of the ransom
money or other loot in return,”\


Najib to the US:

Rest assured, Malaysia will always stand shoulder-to-shoulder with America on this vital mission to eliminate a terror group whose acts sicken all of civilised humanity.

On the other hand,MNLF Chairman Nur Misuari, at a press conference with President Duterte:

And apart from that, our source is saying that since Malaysia is the one who is involved in this kidnapping for ransom, probably, one day, I will drag their leaders into that International Criminal Court. I have all the evidences in my hands. My people are everywhere and besides, they cannot escape because they are hiring my own people.

Refrences
The Malaysian state owned and controlled New Straits Times confessed much,even as
it attempted to portray the Malaysian Government as a peace maker.

Abu Sayyaf militants brandishing weapons in 2014. The beheading of Bernard Then in November by the Abu Sayyaf, a group that has pledged allegiance to the Islamic State, tells of their notoriety.
By ROY GOH - January 27, 2016 @ 11:01am

A three-way meeting was held in Jeddah, Saudi Arabia, on Monday among three parties that have tried for 40 years to find peace.
The two-day meeting involved the Organisation of Islamic Cooperation (OIC), the Philippine government and the Moro National Liberation Front (MNLF). Judging by the lack of coverage by the media, they may not have found any solution yet.
A senior police officer in Kota Kinabalu said: “That is just a formality. It’s an avenue for them to meet and talk.”
Despite his nonchalance, the officer said anything that involved security in southern Philippines was closely monitored by Malaysia.
Because of historical links and proximity, many ply the sea route between Sabah and Southern Philippines for economic, social and political reasons. But, it is those who commit crime that get the most attention.
Malaysia cannot afford to miss out any development in the area where threats prevail from leftists, terrorists, robbers, smugglers and kidnappers. The Lahad Datu intrusion in 2013 and bandit groups that have struck the state six times, in which a total of nine hostages were taken from November 2013 to May last year, are reasons why.
The beheading of one hostage, Bernard Then, last November by the Abu Sayyaf, a group that has pledged allegiance to the Islamic State, tells of their notoriety.
On Jan 10, over 2,000 followers of the MNLF converged on Jolo island in Sulu province, triggering anxiety among the Philippine security forces.
Its fugitive leader, Nur Misuari, was also reportedly present in the gathering, which was later revealed to be a meeting to discuss plans for the tripartite meeting in Jeddah.
Misuari is wanted by the Philippine government for his role in a siege in Zamboanga in 2013, where about 200 people were killed and thousands displaced.
According to a report by ABS-CBN News that quoted an interview by Filipino radio station dzMM, MNLF spokesman Absalum Cerveza confirmed the meeting was presided by Misuari. Cerveza, however, denied speculation that the MNLF was forging ties with the Abu Sayyaf.
He explained the Abu Sayyaf fighters might have been present at the gathering because it coincided with a kanduli (feast), and many of them had blood relations with members of the MNLF.
“It was an open convocation. Everybody was welcomed if they liked to come,” Cerveza had said and denied allegations they were protecting the terrorist organisation.
“We have distanced ourselves from the Abu Sayyaf. We do not have control over them just like the military has no control over them.”
On the contrary, a senior military officer under the Zambasulta Joint Task Force (Zamboanga, Basilan, Sulu and Tawi-Tawi) said there were ties that bonded the two groups.
“Based on revelations by rescued kidnap victims, Abu Sayyaf members in Indanan area (Jolo) are always seeking refuge in MNLF communities because of their blood ties.
“There are MNLF commanders who assist Abu Sayyaf members by providing manpower, firearms and bullets, getting a share of the ransom money or other loot in return,” said the officer.
Defence Minister Datuk Seri Hishammuddin Hussein had said the IS, in its ambition to set up a caliphate in the region, had gained support from the Abu Sayyaf, Bangsamoro Islamic Freedom Fighters and Rajah Solaiman Movement in southern Philippines.
The arrest of a 31-year-old man from Sabah, believed to be the leader of an IS cell made up of seven militants in five states in the peninsula, asserts this.
Chairing the State Security Working Committee meeting here two days ago, Sabah Chief Minister Datuk Seri Musa Aman called for cooperation from all to work together in combating terrorism.
“We must not be complacent. At the same time, the people must unite with the government and security agencies, and play their role by providing information on suspicious activities.
“We need to act on all signs or forms of threats that exist and carry out preventive measures.”
The writer, who is NST’s Sabah bureau chief finds solace from the hills, the wild and drama movies. Inspiration comes from long drives on the road, off-road and the fairways

Posted by Ganesh Sahathevan at 11:51 PM