This writer recently showed that the  1MDB loss may be closer to USD 20 billion.

Consequently blogger Donplaypuks has reported, using a different method and data, that 1MDB borrowed and lost some RM 85 to RM 95 Billion, or approximately USD 19 to 21 Billion (see  full story below).

In addition the C4 group and journalist-analyst P.Gunasegaram have estimated ,again using a method different to and independent of this writer and the blogger Donplaypuks, that 1MDB's accumulated losses totalled RM  39 Billion , and had as well RM 39.8 Billion in outstanding debt. Given that 1MDb and the Malaysian Government have effectively defaulted on that outstanding debt,the total loss is approximately RM 80 Billion.

We have therefore a classic case of triangulation , where three separate sources of data and methods of investigation yield essentially the same result. We have now very strong evidence that the amount lost,essentially stolen, from the various 1MDB schemes is somewhere near USD 20 Billion , or RM 8-90 Billion.This conformation also adds to the evidence that PM Najib and wife Rosmah managed 1MDB on their own, as some kind of family and friends fund.
END 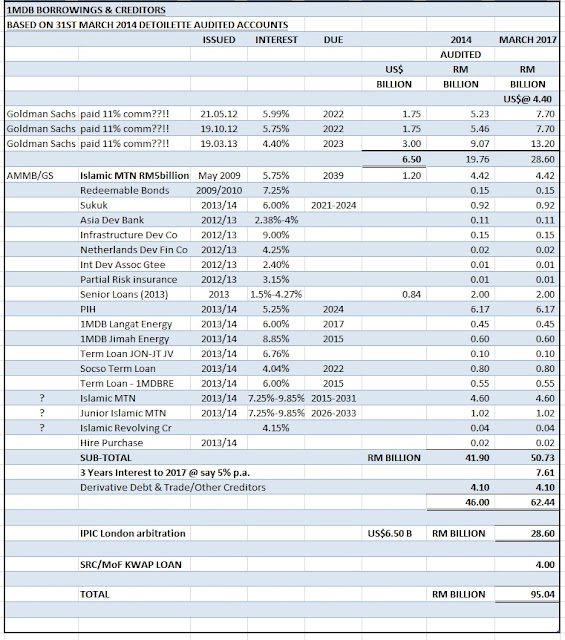 NB.
1. 1MDB'S accounts for the years ended 31st March 2015 and 2016 have yet to be prepared and audited. The MoF has not commented on having the 2013 and 2014 accounts re-audited. No action has been taken by CCM (Companies Commission of Malaysia) to fine 1MDB or its top officers for the pathetic  failure to comply with the law! 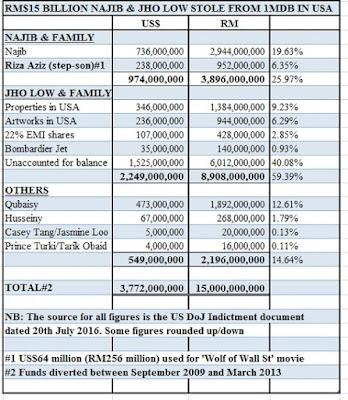 Based on 1MDB's 31st March 2014 Detoilette audited accounts, it had a total of RM46 billion in borrowings and creditors. (Detoilette because auditors Deloitte announced in 2016 that their 2013 AND 2014 audited accounts could not be relied upon, and then resigned! The details are as follows:

Yesterday, Najib "cleverly" announced that about RM10 billion of 1MDB's short tem debts had been repaid. He deliberately failed to say how much more was outstanding. Or, how these were going to be repaid, given it had sold its IPPs and Bandar Malaysia land. He also did not produce an unaudited 1MDB balance sheet to show us its current financial position.

Since 2014, 1MDB has had to service interest on its $42 billion borrowings at an average of say, about 5% per year. It had also defaulted on some loan interest as well as capital repayments. Tycoon Ananada Krishnan was instrumental in re-financing some RM4 billion of 1MDB's loans in 2015!

More than that, the US$ has ballooned to about 4.40 against the ringgit, adding some RM10 billion to 1MDB's debts, due to exchange rate losses.

Another headache is the US$6.5 billion that IPIC of Abu Dhabi has sued 1MDB for interest and loan repayment guarantees. This is the subject of an arbitration case being heard in London.

Based on the above table, 1MDB had about RM95 billion in debts, which after yesterdays announcement, is reduced to RM85 billion.

So, over to Najib:

1. How is this RM85 billion going to be repaid?
2. Which are the projects Najib is going to inflate to illegally cover-up 1MDB's losses? ECRL? Pan Borneo Expressway? KL-Singapore HSL? Rapid JB?
3. Who should go to jail for it all? Surely, Najib first?
4. Why has the IGP/AG failed after 1 year to charge ex-1MDB CEO Sharol Halimi for fraud, theft etc., despite a PAC report demanding it? What about Ismee, Chairman Lodin Wok, Arul Kanda, Mof Chief Secretary Dr. Irwan Serigar Abdullah and Chief Secretary to the Government Dr.Ali Hamsa?

Bamboo River Resort is soon going to be very, very over-crowded!
Posted by Donplaypuks® at 09:47

(Source:http://www.tradingeconomics.com/malaysia/net-errors-and-omissions-adjusted-bop-us-dollar-wb-data.html)
The value for Net errors and Omissions in the Balance Of Payments (BoP, current US$) in Malaysia  has fluctuated between $3,552,316,000 in 1993 and ($19,990,770,000) in 2010.
The "Errors and Omissions" figure is considered a proxy for "unofficial" or rather unaccountable flows of foreign exchange out of the country.
2010 was of course the year when much of the 1MDB theft took place, and it does appear as if that massive unaccounted flow of US Dollars has shown up in the Balance of Payments.

As previously reported on this blog,Sarawak Report has obtained and published photos which show that PM  Najib and wife Rosmah may have conducted 1MDB business with PetroSaudi on their own, without 1MDB management, or board present. Given the extent of the sudden increase in leakages it is not improbable that the business conducted included off-balance sheet transactions executed in 1MDB's name.

The extent of 1MDB's losses could well be in excess of the currently estimated USD 10 billion, and in fact closer to USD 20 billion.That the higher amount has not shown up in any of the investigations conducted so far is easy to explain.These are not in any way reflected in the books and known only to the chairman, PM Najib. Nevertheless,these would still be liabilities borne by  1MDB ,and by extension the Malaysian Government.

Posted by Ganesh Sahathevan at 2:40 AM