The Sydney Morning Herald, that third world publication hiding behind a first world facade, had this to say  when comparing US   President Donald Trump to Chinese President Xi Jinping:

Trump is an angry north wind of threats and bluster; Xi is the benign sun promising prosperity.

The publication prides itself on its liberal views and might have wanted,before publication of that sentence, to consult with one of its heroes, former prime minister Paul Keating,who recently said this:


According to Keating, the Chinese are not looking out into the pacific at the cost of American hegemony or Japanese interests.“The Chinese want to tidy up the east - but their real future is in the west," he said. "They want to rebuild the old silk road, the railways and highways up through the ‘Stan countries', through Istanbul, up to the Baltic coast of Poland," he said. 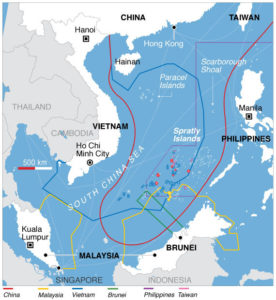 Photo: Voice of America on Wikimedia

Bharat Karnad  explains the strategy evident in the map above:
Now consider the grouping of the Chinese bases on “reclaimed” land. Besides the Cuarteron Reef near Malaysia, which hosts a high-powered 300km-range radar to watch over the Malacca Strait opening to the South China Sea, most of the other built-up bases are bunched at the near centre-point of the nine dash claim line curving short of and around the southern Vietnamese, south-central Kalimantan (Indonesia), Sarawak and Sabah (Malaysia) coasts, Brunei, and the southern Philippine islands.
This virtual mid-South China Sea grouping of the island-facilities to house naval and air assets has divided the South China Sea into two narrower seas on either side of the claim line for maritime traffic to negotiate. This will enable China to better police the two channels from the central verge, as it were.

However Karnad does not account for the proposed Chinese ports on the Malaysian side of the South China Sea,described on this blog in an earlier post:
Among China's acquisitions are  the Strait of Malacca ports in Malaysia ,which are supposed to be for trade. A World Bank study commissioned by the Malaysian government in 2015  showed a new port on Malaysia's west coast is not necessary, as existing facilities have yet to reach capacity. That these port's are likely to be bases for the Chinese Navy and other armed forces seems likely. Taking all of the above together one can then see that China would have effective veto of what moves in and out the South China Sea,starting at the mouth of the Strait of Malacca, giving itself control over trade and resources, including oil ,gas and minerals, in the East. Even if Keating did not quite understand it, that is "the Chinese want to tidy up the east" will mean. Without that "tidy-up" China will not have the resources to expand into the "stans".


The impact of China's efforts in the South China Sea and Strait of Malacca is better understood when one considers the trade roots described in these CSIS trade maps and their accompanying notes: Trade and Resources in the Indian Ocean

The Indian Ocean is not the site of nearly as many territorial or maritime disputes, but it is nonetheless inseparable Pacific assets and interests. Eighty percent of Japanese and 39 percent of Chinese oil imports pass through the Indian Ocean en route from the Middle East. Chinese firms also have billions of dollars of investments in East Africa, concentrated primarily in the oil and gas, railways and roads, and other mining sectors. South China Sea LNG Flows
One-third of the world’s liquefied natural gas passes through the Straits of Malacca and into the South China Sea, with the bulk of it originating in the Persian Gulf. LNG also flows into the region from Southeast Asia and Oceania. Much of this imported LNG is bound for Japan and South Korea.

Australians need  to keep in mind that theLNG export routes are also our petroleum import routes,Australia no longer refines crude, so all refined product including petroleum must come via that route, often from Singapore.

China is therefore setting the stage for complete domination of trade in this region, which will leave Australia totally dependent on Chinese goodwill for supplies of basic fuel.

Contrary to Xi and China being "the benign sun promising prosperity" , this will be a case of China demanding Australian resources on  its terms .Australia will be in no position to say no.

Posted by Ganesh Sahathevan at 8:19 PM