Turnbull offering Najib asylum? Turnbull meets with Najib in Lima, while in KL thousands call for Najib's arrest and sacking 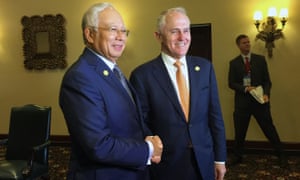 Malcolm Turnbull and the Malaysian prime minister, Najib Razak, on the sidelines of the Apec leaders’ summit in Lima, Peru, where they discussed ‘irregular migration’. Photograph: Lisa Martin/AAP

t’s understood the pair discussed “irregular migration” among other topics such as trade, regional security, the Middle East and strategic issues such as the South China Sea during the meeting. There has been media speculation a deal could be close. 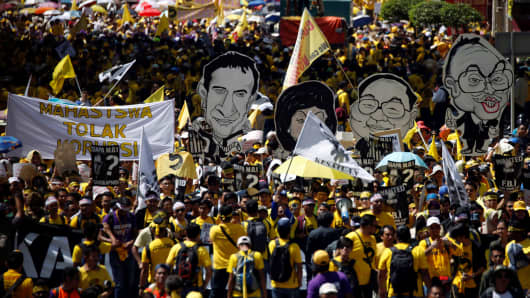 
Thousands of anti-government protesters marched in Malaysia's capital on Saturday demanding the resignation of Prime Minister Najib Razak over his alleged involvement in a multi-billion dollar misappropriation scandal.


As previously reported Turnbull and the Australian Government have been very slow to their part in investigating and charging those in Australia involved in that "misappropriation" scandal".