Hacking the Barracua Block 1A design:-NEWS ALERT-DCNS may have sold Turnbull an outdated but more expensive design ............

by Ganesh Sahathevan
It has been previously reported on this blog that the leaked Indian Scorpene designs
probably provided the specifications , if not a pathway, for incorporating the "top secret",
innovative and disruptive pump jet propulsion system that DCNS has sold Australia,
at a cost of AUD 50 billion ,and counting.

In selling the Shortfin Barracuda Block 1A submarine , DCNS said:


However, the above advertisement for Malcolm Turnbull's very expensive new
toy is at odds with a number of other official documents , published by DCNS, and
the Indian Government.

India's Minister For Defence Manohar Parrikar, has told his parliament that India will
build more Scorpenes,in addition to the six that are being built in India in a joint venture
with DCNS.Readers of this blog will recall that India's contract with DCNS includes a
contemporary technology clause.

India's Tribune newspaper in reporting Parrikar's statement in Parliament noted:
The first of India's six Scorpene diesel-electric attack submarines (SSKs),
the INS Kalvari, was set afloat for sea trials in December 2015.
The vessel is scheduled to be commissioned in September 2016.The 66-metre-long
INS Kalvari is part of a $3.6 billion contract signed with DCNS.
October 2005. While the first four subs are conventional submarines, the last two are
to be equipped with the Air Independent Propulsion (AIP) system, which will enable
the vessel to stay underwater for longer.


The AIP system is part of DCNS's latest initiative, the SMX®-Océan conventionally
powered attack submarine. Like Australia's state of the art Barracuda Block 1A design,
"the new vessel draws extensively on the design of a state-of-the-art nuclear- powered
submarine."


Regardless of one's opinion with regards the pros and cons of the AIP system, the issue
here is whether:
a) The Shortfin Barracuda Block 1A is in fact "state of the art"
b) The leaked Indian Scorpene designs are, as Malcolm Turnbull has claimed, outdated
and of norelevance to the Barracuda Block 1A.


Clearly, one cannot have two 'states of the art" diesel electric designs emanating from the
same company, in this case DCNS.
Put in another way, DCNS will not sell any SMX-Oceans if they are not better than the
Barracuda Block 1A, unless of course an argument can be made that the Block 1A is a more
expensive design, with features that cannot be found elsewhere. That argument is not likely to
work in the literally cut throat world of defence contracting , and DCNS is more than likely
to have to provide all of its latest designs to all of its customers.

Meanwhile, the Indians appear to have done a lot of work on developing the API system, enough to
be able to reject DCNS's offer of the "latest" that they have in the area:

Amit Cowshish, former financial adviser to the Ministry of Defense says, "They (DCNS)
are offering  something which is already available in India."
The Defense Research Development Organization is already developing AIPs in collaboration with
DCNS for Scorpene class submarines.

Given the work the Indians have already done, one can be almost certain that their plans include
the "top secret"  pump jet propulsion system,and that they can choose to incorporate it into
their Scorpenes, if they so wish.
Meanwhile,readers might be interested in looking at the material below. It does look as if the
SMX-Ocean looks like something that can beat the Barracua Block 1A. It even looks
like it can incorporate the top secret Australian only pump jet propulsion system.

DCNS unveiled the SMX®-Océan conventionally powered attack submarine. The new vessel draws extensively
on the design of a state-of-the-art nuclear- powered submarine, with a number of key innovations that give this diesel-electric adaptation truly outstanding performance. DCNS is a French industrial group specialised in naval defence and energy. The Group employs more than 13,000 people in 10 countries.
This innovative concept ship promises submerged endurance and deployment capabilities that are unprecedented for a conventional-propulsion submarine. With up to three months’ endurance, an SMX®-Océan could cross the Atlantic six times without surfacing. Its transit speed is up to 14 knots.
To achieve this level of performance, DCNS teams have developed and combined a number of innovations including a high-performance air-independent propulsion (AIP) system using second- generation fuel cells for submerged endurance of up to three weeks.
The SMX®-Océan features the same combat system, provisions for special forces’ missions, masts and general layout as the Barracuda SSN.
The SMX Ocean and other air independent propulsion diesel submarines can replace nuclear submarines at lower cost for the subs and without costly infrastructure. 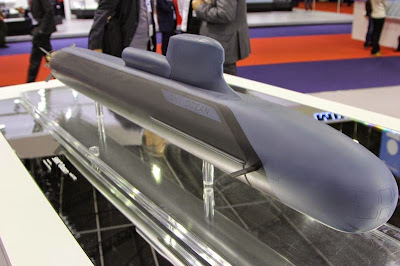 The first Barracuda Class submarine is still expected to enter service in 2017, with the other 4 following every two years (2019, 2021, 2023, 2025) and then the 6th and last boat due to be commissioned in 2026-2027.
A deployable 'virtual mast' system is built into the SMX-Ocean design. Basically, this is a buoy system fitted withelectro-optical, signals intelligence, and even radar sensors, as well as data-link communications, that can be deployed while the sub is at great depth. Such a system can be used as a traditional periscope would, to visually survey the boat's surface surroundings and target craft if need be, or it could be used for communications, building an aerial and surface radar picture, or to relay information collected by a sub-launched UAV.
The "virtual mast" technology largely alleviates the most vulnerable situation for an attack sub. Traditional subs have to regularly breaking the surface of the water to prosecute an attack, communicate, or to simply see what is going on around it. The traditional periscope itself creates a radar return that many sub hunting radar systems are incredibly capable at detecting, and it is often a sub hunter's best clue as to a boat's location. In addition, all these technologies, including UUVs, UAVs and virtual masts are all expendable, as they can be abandoned on command or destroyed by the enemy without a major loss of the submarine they are supporting. It is a much better deal losing a $2M UUV instead of a $1B+ submarine, not even counting the cost in human life.
4D firepower: effective against underwater, surface, land and air threats
With a total of 34 weapons including torpedoes, mines, anti-ship missiles, cruise missiles and anti-air missiles, the SMX®-Océan’s firepower will be unprecedented for an SSK. The SMX®-Océan concept ship design also includes vertical launchers, another major innovation in SSK design, to provide a salvo capability for cruise missile strikes on land targets.
A reconfigurable multi-role submarine
The SMX®-Ocean offers more multi-role capabilities than any other submarine of its type. It can operate alone or as part of a carrier group or other naval deployment, and will be the only conventionally powered submarine with the ability to deploy special forces, combat swimmers, unmanned underwater vehicles (UUVs) and even unmanned aerial vehicles (UAVs).
SOURCES - DNCS, wikipedia, Defense Industry Daily, Jalopnik, youtub
Posted by Ganesh Sahathevan at 9:44 PM