It has been previously reported on this blog that the Government Of Singapore's agreements with Malaysia for the supply of water will need revision regardless of  the current  relationship the country and its leaders have with Malaysia's Najib Razak.It has been previously reported that concerns for the water agreements may be affecting Singapore's desire  to fully prosecute the 1 MDB matter. 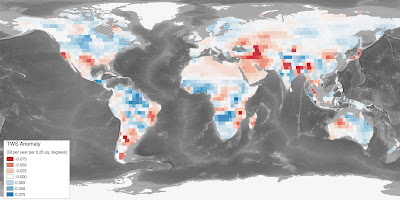 Using the data, the researchers tracked the amount of water stored on land between April 2002 and November 2014.  The red shading indicates water losses from land, while the blue shading show water gains.

The Malay Peninsula has clearly suffered a significant loss of groundwater over the period, among the worse in the world. An enlarged version of the map can be sighted at this link.
This depletion  would explain in part why catchment levels have been falling, much to the concern of the Singaporeans even as they continue to do what they can to keep the agreements in place, without any change. The data suggests that the catchments are severely stressed, and that lower levels of water can be expected regardless of weather patters.

Posted by Ganesh Sahathevan at 6:39 PM