While Singapore continues to play its game of realpolitik with Malaysian PM Najib Razak ,doing it what it can to imagine away its own evidence on the 1 MDB affair, the realities that underlie  Malaysia-Singapore relations seem to have been ignored.
These are as follows:
First,Najib Razak cannot remain PM forever, and whoever succeeds him will have to face the consequences of the 1 MDB affair.It is too large a hole to ever disappear.
In doing so, Singapore's role in helping hide at least USD 1 billion will have to be confronted.An increasingly restless population, angered by loss of work and rising costs of living, will demand it.

Then, regardless of what the leaders on either side of the causeway might think, these following  matters that are in the public domain which concern the supply of increasingly scarce water in Malaysia to Singapore will have to be dealt with, and long standing grievances on the Malay side will have to be addressed.

While a number of agreements have been entered into governing the supply of water, and while Singapore's lawyers have shown time and time again that they are more than capable of taking on the Malaysians, no lawyer can fight reality.Indeed, frustration is a basis for abandoning contractual agreements. And , the factors that might frustrate the Singapore-Malaysia water agreements are quite evident.

First, there may have been an over-estimation of the size of the catchments on the Johor/Malaysia side.  The Johor River Basin  is the primary basin  that provides Singapore's water.This early  estimate of the Johor River basin,made sometime in the late 80s shows the catchment extending all the way to the south-east coast of Johor.The size of the basin shown here was probably the basis for Singapore-Malaysia water negotiations during the 70s,and onward: 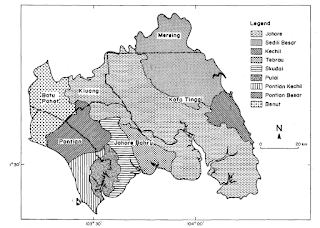 However, this later estimate of the basin ,based on satellite imagery captured sometime in the late 90s, shows clearly a far smaller catchment, which is confined to the central part of Johor. 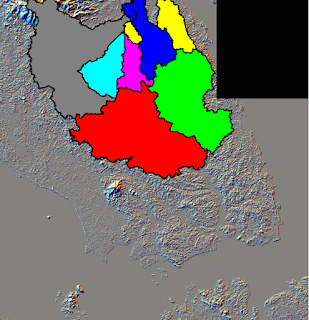 While Singapore secured its supply of water via the 1990 agreement that involved  the construction of a dam across the Sungei Linggiu (a tributary of the Johor River) , that is not likely to change the fact that water continues to be drawn from the Johor River Basin. Even if it does the satellite image below shows that there is a long term problem that Singapore has identified, which is very much part of national strategic planning, but appears to have been ignored with regards the Sungei Linggui Dam. That problem is  climate change, and one can readily see from the image below that the catchment, which is seen in this image as a significantly sized black spot in northern Johor, is surrounded by vegetation which will, by Singapore's own estimates, disappear as temperature rises.This in turn will adversely impact that catchment's capacity, and Johor's ability to supply itself.

These issues have been the subject of very delicate high level negotiations over the past 50 years, but now the issue of some US$ 1- 4 billion misappropriated from the Malaysian Government and stored, at least in part, in Singapore, will almost certainly be a factor. Singapore cannot expect that Malaysia would  not consider itself to be the aggrieved party who will seek recompense in any way possible.
END

Posted by Ganesh Sahathevan at 7:05 PM