Is Falcon Private Bank in breach of its US Non-Prosecution Agreement? Further implications of the Najib Razak USD 681 million "donation".


Via a letter dated 20 July 2015 the US Department Of Justice informed Falcon Private Bank that it accepted its proposal for non-prosecution with regards an ongoing US Government investigation into tax evasion.The main contents of that letter are as follows:


Falcon Private Bank AG ( .. Falcon'') submitted a Letter of lntent on December 23, 2013, to participate in Category 2 of the Department of Justice's Program for Non-Prosecution Agreements or Non-Target Letters for Swiss Banks, as announced on August 29, 2013 (hereafter "Swiss Banlc Program"). This Non-Prosecution Agreement ( .. Agreement") is entered into based on the representations of Falcon in its Letter of lntent and infornnation provided by Falcon pursuant to the terms of the Swiss Bank Program. The Swiss Bank Program is incorporated by reference herein in its entirety in this Agreement.1 Any violation by Falcon of the Swiss Bank Program will constitute a breach of this Agreement.


The Swiss Bank Program " provides a path for Swiss banks to resolve potential criminal liabilities in the United States. Swiss banks eligible to enter the program were required to advise the department by Dec. 31, 2013, that they had reason to believe that they had committed tax-related criminal offenses in connection with undeclared U.S.-related accounts."

Under the program, banks are required to:

Falcon agreed to all of the above and paid a penalty of US$1.86 million.

Shortly after the above agreement was reached whistle blower website Sarawak Report revealed that Falcon had been an active party in what has now become known as the Najib Razak donation scandal. That expose showed ,in essence, how Falcon set-up a dummy corporation called Tanore Finance Corp (BVI), which was then used as the entity on record to channel funds from Singapore and via Wells Fargo New York  into the Malaysian bank accounts of that country's prime minister Najib Razak (see story below).
The essential transactions have been described as follows:

A US citizen named  Teik Jho Low is widely believed to be party to these transactions. 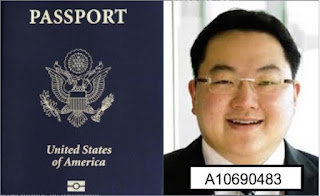 He is also believed to be involved in a number of real estate transaction, financed at l
east in part
from the proceeds of the above and related transactions.

Did Falcon disclose the above as part of its settlement with the Department of Justice, or were the above ,and related transactions, excluded from Falcon's disclosures?

Off-duty look – Falcon CEO Eduardo Leeman interviewed by Abu Dhabi’s The National, explained he was “totally against more [banking] regulation”
Research into the BVI company Tanore Finance Corporation has shown how Najib’s mystery ‘Middle Eastern Donor’ set up this vehicle to pay US$681 million into the Prime Minister’s account, using the services of Aabar’s very own Falcon Bank in Zurich.
The information casts further doubt over the already unbelievable story that a mystery third party billionaire had decided to give this money to Najib and had coincidentally chosen to pass it through an account at Falcon in Singapore, which just happens to be owned by Najib’s main business partner at 1MDB (Aabar itself).
We can now see that Falcon was far more extensively involved in the operation at Headquarters level, in its role as the actual incorporator of Tanore, supposedly on behalf of the so-called third party ‘donor’.
This leaves it ever more probable that this mystery ‘US$681 million dollar donor’ was merely a front for Najib and Aabar, in order to channel money out of their ‘strategic joint venture’ into the Prime Minister’s account.

Linked in – Natalie’s name features on the incorporation documents according to corporate investigators
Corporate investigators have established that Tanore Finance Corporation BVI was incorporated by Falcon Bank itself through a Zurich based corporate services company named Trident Corporate Services on 19th October 2012.
The Senior Customer Relationship Manager involved in liaising with Trident on this matter was the Swiss national Natalie Schrade Grob, based at Falcon’s Zurich headquarters.
Natalie answers directly to none other than the CEO of the bank Eduardo Leemann, who in turn was reporting directly to the Aabar boss, Khadem al Qubaisi, according to our information.

Official photo – Leemann and Al Qubaisi. Falcon Bank in Zurich set up the entire transfer operation that went through Singapore. Leemann, who is ex-Goldman Sachs, could only have been heavily involved.
She incorporated Tanore on behalf of Falcon Bank (which advertises such ’boutique’ services for its wealthy clients), using a company called Trident Corporate Services, which is also headquartered in her home city of Zurich.
Trident Corporate Services owns Trident Trust Company (BVI) Limited, under whom Tanore is officially registered in the BVI.

Trident are based in Zurich and specialise in off-shore incorporations, for which purpose Natalie approached them for their services
This means that the ‘anonymous donor’ who paid Najib engaged none other than Aabar’s Al Qubaisi-controlled Falcon Bank in order to set up his special purpose company vehicle to perform this kind deed of ‘donation’ five months before Najib took receipt of the money and then closed the company down again a few months later.
Given that it is Aabar which has been up to its neck in shady deals with 1MDB, including the disappearance of  US$1.4 billion from their joint ‘power purchase’ bond issues (2012) and the disappearance of a further US$1.4 billion from their joint ‘strategic partnership’ arrangement (2013) one can only describe the matter as a highly significant coincidence.

Falcon’s top duo al Husseiny and al Qubaisi (left) shake hands on the 1MDB ‘strategic partnership’ with Najib and 1MDB Chair Lodin Wok Kamaruddin
One can now question whether there is not strong evidence of a pre-meditated and deliberate creation of a structure in order to transfer this secret money in advance of further deals between Aabar and 1MDB?
No wonder that the Swiss authorities have launched investigations into 1MDB related banks, which Sarawak Report is reliably informed includes the Zurich based Falconbank.
The first question that these investigators will be bound to ask Natalie and her boss Eduardo will be something that Najib has been mysteriously reluctant to divulge.
That is, who was Falcon’s actual client and the beneficial owner of Tanore Finance Corporation – in other words what was

the identity of the alleged Middle Eastern ‘donor’?

Wells Fargo in the middle of a Malaysian money laundering scandal

Posted by Ganesh Sahathevan at 4:48 AM