It was reported earlier this week on this blog and the TerrorFinance Blog that Richard Haythornthwaite, the chairman of Mastercard, has been implicated in the money laundering scheme involving Prince Turki Al-Saud's Petrosaudi. As reported on the Terror Finance Blog, UK regulators are trying hard to look away, in what appears to be an attempt to save Prince Turki.

Meanwhile, Haythornthwaite's Petrosaudi appears to have further implicated itself in the matter by issuing a letter explicitly confirming its ownership of a company named Good Star Ltd,which is an integral part of the theft and money laundering allegations. 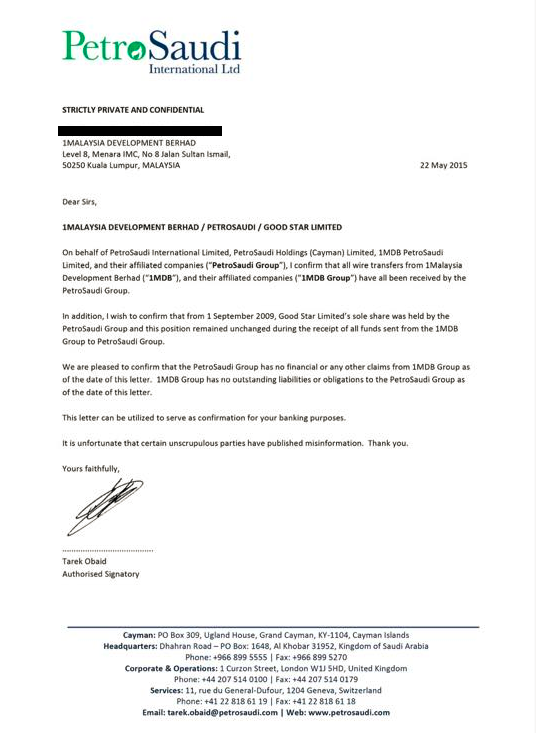 
Clare Rewcastle-Brown's Sarawak Report has provided evidence to show that in this letter Haythornthwaite's Petrosaudi has made a claim that is false, and designed to conceal the involvement of the Malaysian businessman Jho Low.
The letter is also contradicted by this commission agreement between Good Star and Tarek Obaid, PetroSaudi's CEO ,published by Sarawak Report, where Obaid is promised a commission for directing investments to Malaysia.

Clearly, Petrosaudi has no interest in paying its CEO a commission for directing investment into Malaysia.
As reported earlier (see story below), Haythornthwaite has denied if not attempted to distance himself from Petrosaudi, at least to Sarawak Report. As shown, that attempt was curious given that his PetroSaudi involvement is disclosed in the Network Rail Infrastructure Limited 2012 Annual Report. Now it can be shown that it is also disclosed in a Mastercard SEC disclosure.
The acronym PSI UK Ltd has been used instead of the full form , PetroSaudi International (UK) Ltd, as is the case in the Network Rail annual report.

The 1 MDB issue has now spread toa number of jurisdictions, given that there have been
questionable transactions involving 1 MDB and PetroSaudi in the UK, Malaysia , the Cayman Islands, Hong Kong, Australia and Singapore. Subsequently there are investigations under way in a number of jurisdictions, which directly or indirectly concern these transactions.
In the latest of these the Federal Court Of Australia has ordered the winding up of fund manager reported to have been entrusted with some USD 2 billion of 1 MDB money,being the proceeds of some business dealings with PetroSaudi.

This cannot be a good look for any company in the business of providing transaction services, let alone one with the worldwide reach of Mastercard. The company needs to provide shareholders and the public an explanation ,quickly.

Richard Haythornthwaite, the chairman of Mastercard,  has been implicated in the money
laundering scheme involving Prince Turki Al-Saud previously reported here. As reported,
that scheme has involved the apparent theft of billions of dollars from
the Malaysian sovereign fund,1 MDB Bhd.
The investigate news site Sarawak Report in its latest edition of an ongoing investigation
into Turki's Petrosaudi has reported:

If I knew I wouldn’t tell Sarawak Report

Given the mounds of evidence now apparent about the collusion of PetroSaudi in the
1MDB heist masterminded by Jho Low and this latest proof from Good Star’s own incorporation
records, Sarawak Report wrote last week to the company’s President, the prominent British
businessman Rick Haythornthwaite.

Haythornthwaite is also the Chairman of the UK energy giant Centrica.  We asked if he knew of
PetroSaudi’s letter claiming that it owns Good Star and if he had authorised the company to make
such a claim?
In his response to Sarawak Report 's editor Clare Rewcastle-Brown Haythornthwaite said among
other things:
Dear Mrs Rewcastle
Having now done some research into your background, it is clear that you are an active
campaigning blogger rather than an objective journalist with a desire to understand the true
facts behind this matter.
That your email to me contains fundamental factual errors – not least suggesting
that I am, or have ever been, chairman of PetroSaudi International – reinforces my
concerns about your credibility.
Therefore, even if I were to be in possession of information relevant to your query,
I would be unwilling to assist you in your questionable activities.

Haythornthwaite's apparent denial is interesting  given this disclosure of his CV in  the
Network Rail Infrastructure Limited  2012 Annual Report :
Rick Haythornthwaite Chairman
Rick Haythornthwaite, 55, has been the Company’s Non-Executive Chairman since July 2009
having joined the Board in March 2009 as a Non-Executive Director. He was Chief Executive of
Invensys plc, from 2001 to 2005. He was also previously Group Chief Executive of Blue Circle
Industries and spent 18 years with BP in various senior roles. He is currently
Non-Executive Chairman of MasterCard Inc, a Senior Advisor to STAR Capital Partners and
President of PetroSaudi International (UK) Ltd. His previous non-executive roles
included Board membership of ICI, Land Securities and Lafarge. In the voluntary sector,
he is Chairman of the Southbank Centre and Chairman of the World Wide Web Foundation.
Rick will retire from the Board at the Company’s annual general meeting (AGM) on 19 July 2012.
Appointed 23 March 2009

While Haythornthwaite might get away with saying "  even if I were to be in
possession of information relevant to your query, I would be unwilling to assist you
in your questionable activities" to Rewcastle-Brown's Sarawak Report, it is not a
position he can maintain with regards Mastercard, its shareholders, and the relevant
authorities, in the US, UK and other jurisdictions that are investigating the 1 MDB matter.
END
See also « Malaysia's Deputy PM Implicates Wells Fargo In a Money Dirtying Scheme | Main
Posted by Ganesh Sahathevan at 9:14 PM